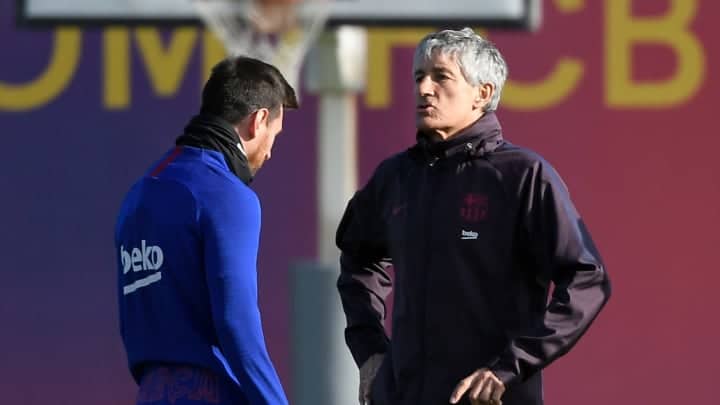 Former Barcelona boss Quique Setien has revealed how hard it is to manage Lionel Messi and that he struggled to stamp his authority on the Argentina star during his time in charge.

Setien believes Messi is the ‘best of all time' but claims he has a way of getting what ‘he wants' at Barcelona, where he has spent his entire career and cemented legendary status.

In an interview with El Pais, Setien spoke about the difficulty of managing the six-time Ballon d'Or winner.

‘'I think Messi is the best of all time,'’ Setien said. ‘’There have been other great players who have been great, but the continuity that this boy has had throughout the years has not been had by anyone.

‘'Leo is difficult to manage. Who am I to change him! If they have accepted him as he is for years and have not changed him.

‘’It's something inherent in many athletes that can be seen in the Michael Jordan documentary (‘The Last Dance'). You see things you don't expect.

‘’He's very reserved but he makes you see the things that he wants. He doesn't talk much.'

Setien believes he would have lasted longer in the role if he focused on the whole club rather than individual players.

‘’After leaving what I am clear on is that at certain times I should have made other decisions, but there's something above you: the club,'’ he added.

‘'And it is above the president, the player, the coach.

”It's the club and the fans. They are the ones to whom you owe the greatest respect, and you have to do what is most convenient for the club as a whole.'’