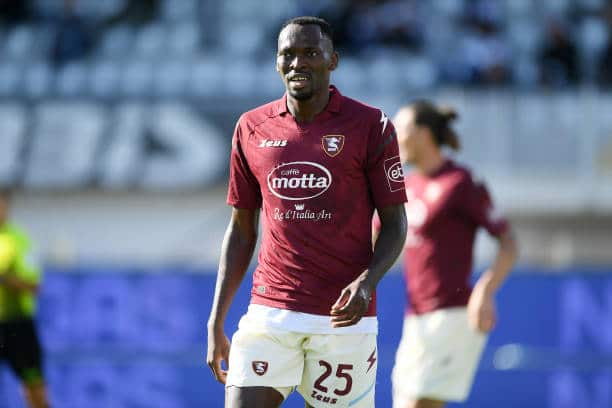 Simy Nwankwo is currently experiencing a goal drought at Salernitana but is expected to bounce back.

The Nigerian striker has managed just one goal from six starts this season.

A striker’s credit remains the number and frequency of goals that he scores. Unlike defenders, it is an arduous task to make a case for a striker who is not scoring goals. That is why when a striker goes a few games without hitting the back of the net, his confidence starts to go, and the simple things he used to do becomes an arduous task.

Strikers who have bounced back from such positions are not uncommon as the problem is usually psychological rather than physical. For instance, Tottenham’s Harry Kane is going through a goal drought this season, but only an insane mind would write him off as finished. As they say, form is temporary; class is permanent.

Nigeria’s Simy Nwankwo is another prolific striker going through a drought, but his Italian manager backs the striker to find his form again.

Nwankwo struggling for form at Salernitana

It’s been a challenging season for Simy Nwankwo. The lanky striker is one Nigerian player who is adept at scoring goals, but everything is going awry for him this season.

Simy was in top form last season as he supplied the team with 20 goals and three assists from 38 games. That kind of form is the preserve of strikers at title-challenging sides, but Simy was pulling it off at Crotone. With the goals the Nigerian supplied, Crotone was still unable to avoid relegation.

It was his form that forced Salernitana to shell out €500,000 in loan fees to bring him to the Stadio Arechi, but Simy has struggled to replicate that form this season. Despite his goal drought, Salernitana manager Stefano Colantuono has backed the Nigerian to come good.

Simy has netted just once from eight appearances this season, but Colantuono expects the situation to change soon.

Simy backed to bounce back

Game time has been hard to come by this season for Simy Nwankwo. The striker has started just six games from a possible 12 this season.

At the pre-Sampdoria press conference, Salernitana manager Colantuono opened up on many issues, including Simy’s poor form this season. He confessed that consistent game time is a luxury that would have helped Simy back to his feet. It is a luxury as there is pressure to deliver immediately. It is why the manager is always tinkering with his squad.

The manager admits that he has spoken with Simy and advised him to be relaxed. According to the former Atalanta manager, it’s only a matter of time, and the goals will start to flow.

Colantuono believes that the situation with Simy is not uncommon in football and claims to have told Simy to be calm. He said that Simy’s path was troubled and that continuity would do him a lot of good, but single management of all the players is something Salernitana could not afford.

From 12 games this season, Salernitana have managed two wins plus a draw and are rooted in the relegation zone. They sit 19th on the log.