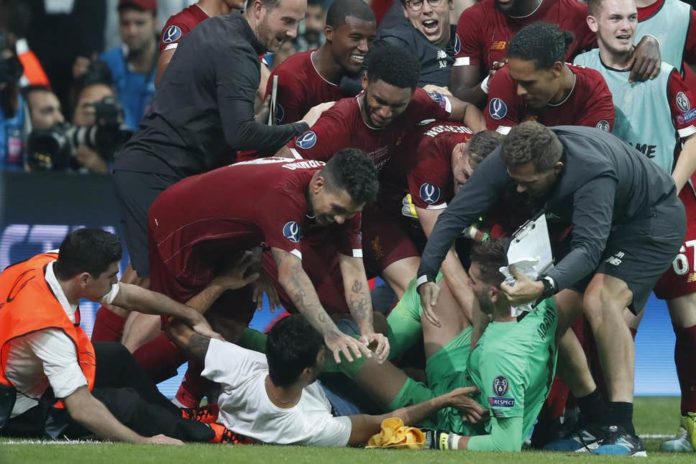 Liverpool have registered their concern to Europe’s governing body about lack of security at the Super Cup final after matchwinner Adrian was injured by a pitch invader.

Adrian is fighting to be fit for his side’s trip to Southampton after suffering a swollen ankle in the post-match celebrations, deepening the goalkeeper crisis at the club.

Number one Alisson is currently absent with a torn calf, meaning 35-year-old Andy Lonergan is on standby at St Mary’s Stadium.

“When we were all together a supporter jumped on us, he was chased by some security guys slipped and kicked his ankle, said Klopp.

“Crazy. Yesterday it was swollen. Today I spoke to him. He is here. It is better, much better than yesterday, so we have to see. Apart from that, it was a brilliant night for him for sure.”

It was the latest in a growing number of incidents in Uefa and domestic games.

In European home games, Liverpool could anticipate a fine for such a breach and they have requested Uefa’s observations given the stewarding in the Besiktas Stadium came under their jurisdiction.

Klopp did acknowledge, however, the culpability of the supporter involved.

“There was only Liverpool fans there pretty much so it probably was one,” said Klopp.

“What can I say? There is no doubt about how much we love our fans but if they could all stop doing that because that’s the worst example I have heard about.

“It's not funny.  I like that we don't have fences in stadiums but that means a lot of responsibility for supporters as well.

“If one supporter cannot hesitate or stop himself, then supporters around him should do it. It’s not funny. It's crazy. How can something like this happen?”