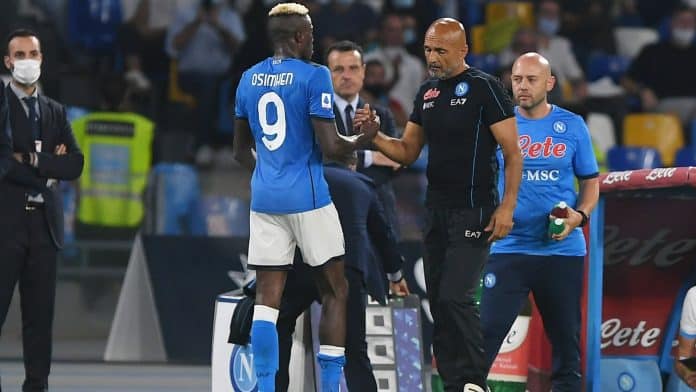 Napoli manager Luciano Spalletti has advised striker Victor Osimhen to do more with his passes and work with his teammates.

Spalletti made this statement during his post-match report as Napoli came back from a goal down to defeat Atalanta 2-1 away from home on Saturday.

Osimhen was at his best again, scoring one goal and assisting another, but the Italian tactician is still not satisfied with the Super Eagles striker’s performance.

The former Lille forward has now scored seven goals in his last six games as Napoli extended their unbeaten Serie A run.

Osimhen accidentally gifted Atalanta the opener, but turned it around with a goal and assist for Eljif Elmas, as Napoli fought back to win this top-of-the-table showdown and go six points clear at the top.

“Osimhen is a player who has these sudden surges and spurts, but he needs to every now and then also figure out how to pass it and work with his teammates. He was a little tired today, but still created chances, caused issues, and when Atalanta pushed their wingbacks higher with the strikers wide, he was alone in midfield and in those situations can do more than he did tonight.”

It was the first time this season that Napoli have not been able to call on Kvicha Kvaratskhelia, as the Georgia international was out of action with back pain.

“He had this knock in the back from Trent Alexander-Arnold and seemed fine, but it got worse after a couple of days.

“Fortunately, we have players who can fill in, so we decided to let him stay home and rest for a bit rather than drag him around the place on another journey,” explained Spalletti.

“We’ll get nowhere if we only have one player to rely on, we need 22 who can be relied upon at any moment.”

The 23-year-old Nigeria striker has now scored more Serie A goals (32) than any other Nigerian player in the competition’s history. He surpassed Simy Nwankwo’s record with his latest on Saturday.