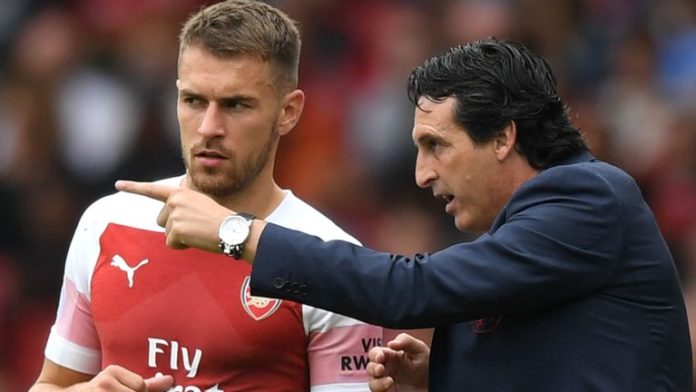 Arsenal's fans have taken to Twitter this afternoon to demand that Unai Emery find a place in his starting XI for Aaron Ramsey henceforth, following West Ham loss.

The Gunners headed into proceedings hoping to keep their positive recent run of form going, after Arsenal comfortably put Fulham and Blackpool to the sword in their last two outings.

Youngster Declan Rice bagged the only goal of the clash, after being set up by former Arsenal man Samir Nasri early in the second-half.

?@_DeclanRice is today's @premierleague man of the match ?

?1st career goal – 10th teenager to score a PL goal for @WestHamUtd
?Gained possession 10 times – most in match
?Joint most interceptions in match (3)
?Celebrates his 20th birthday on Monday pic.twitter.com/cRly92oAoy

But, while West Ham did their part to secure an important 3 points, the Irons were aided to no end by a dismal showing from Arsenal.

The Gunners looked completely toothless for the greater part of the game, with Unai Emery's men having only begun to look in any way threatening following Aaron Ramsey's introduction on the hour-mark.

Ramsey, who will be departing the Emirates on a free transfer at the end of the season, added some much-needed drive and intent to Arsenal's midfield, with Gunners supporters having since absolutely torn into their side's boss over his continued decision to leave the Welshman out of his starting XI.

Its not only arrogant, but borderline criminal that Emery won’t start Ramsey, especially in Özil’s absence. Playing with two strikers is going to do nothing if you have no creativity.

It’s beyond me why Emery still refuses to start Ramsey

Ramsey should start for us in every game.. ??

Xhaka off… that feels new.

Bit embarrassing we have to keep asking Ramsey to save the day. Just start him.

In the absence of Ozil, u start Ramsey. Not leave him on the bench just because he is leaving Arsenal soon @Emery

Ramsey our best cm at the club for time being but Emery likes to fuck about by never giving him starting role, we pay his wages so he should be in xi from start till he leaves.

If we are not selling Ramsey in January, why start that 19yr old kid? Seriously I am fed up already. Emery can get the fuck out.

bring Ramsey on you start to creat chances who would have thought that ??