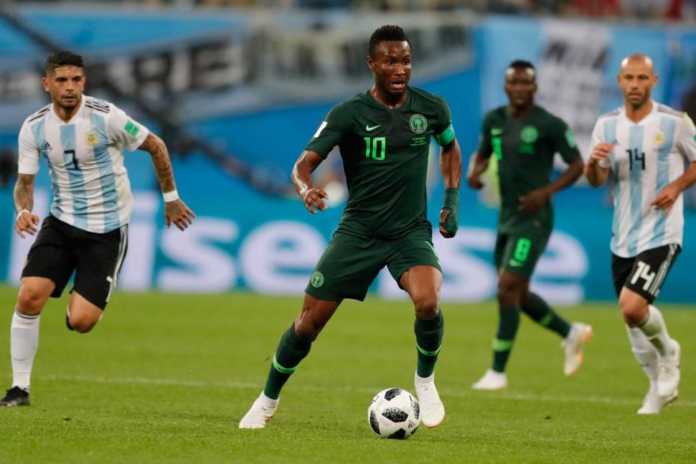 This will be the third successive international game Chelsea legend John Obi Mikel will not be appearing for the Super Eagles, as manager Gernot Rohr has omitted the central midfielder from the roster for this month's 2019 Africa Cup of Nations qualifiers against Libya.

Mikel's last appearance for the Nigeria National Team was a 2-1 loss to an Argentina, parading debatably the best player in the world, Lionel Messi, at the 2018 World Cup.

Recollecting the events of the match at Saint-Petersburg Arena, Mikel says that Nigeria would have won the match and qualified for the last sixteen if Turkish referee Cüneyt Cakir had awarded a penalty to the Super Eagles  in the second half after a handball by Manchester United defender Marcos Rojo.

In an interview with China Central Television ‘Football Night' on October 1, Mikel said : ”When we played against Argentina, we did a good job until the 86th minute, but we still lost.

”At this time I have to look for strength from other places. This is a very difficult time. I am very upset on the pitch, but I have to find the motivation.

”Until today, I still think that we can win that game if we got the penalty. I think the referee is unfair. We could have won the game, but the game is over.

”Argentina is great. Messi is also the best player in the world, but I hope we can win Argentina next time.”

The Nigeria number ten concluded by saying that he wants to remain at Tianjin Teda for as long as possible as he is content being in China amid rumor linking him with a departure in the January transfer window.