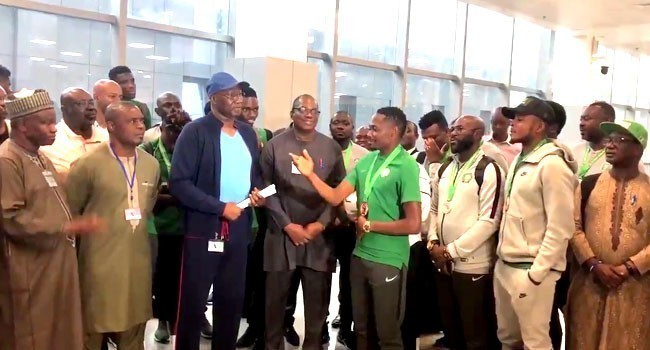 The Super Eagles have arrived Nigeria from Egypt where they participated in the 2019 Africa Cup of Nations (AFCON) championship.

Gernot Rohr and his crew returned to the country on Friday, two days after defeating Tunisia 1-0 in the third-place match to win the bronze medal of the tournament.

Secretary to the Government of the Federation (SGF), Mr Boss Mustapha, and some leaders of the Nigeria Football Federation (NFF) received the Eagles at the Nnamdi Azikiwe International Airport in Abuja.

The three-time African champions lost to Algeria 2-1 in the semi-final.

Algeria will be up against Senegal in the final match on Friday evening at the Cairo International Stadium.

Below are some of the photos and videos shared by @NGSuperEagles of the team’s arrival on Twitter.

Big Thank you to our wonderful @NGRPresident His Excellency @MBuhari who was represented by the SGF and other top dignitaries for giving us a rousing welcome from Egypt. #SoarSuperEagles#Team9jaStrong pic.twitter.com/BBSEdLj0qq