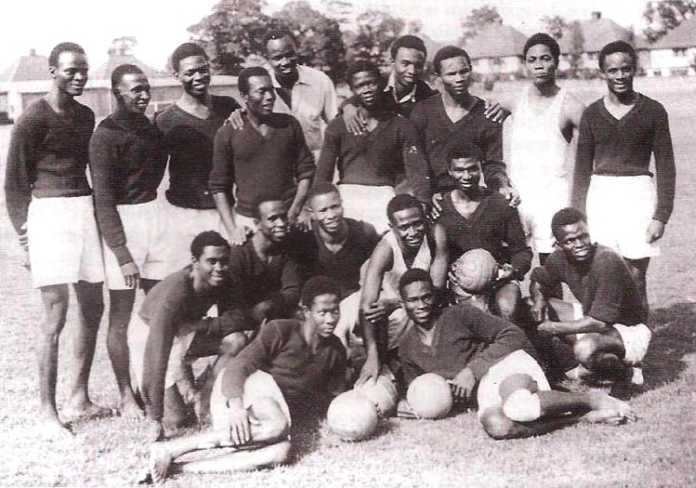 I know, the question on your mind now is which country will host AFCON 2019?

Cameroon was stripped of the right to host the tournament and a new host country has been announced by Confederation of African Football, and that is Egypt.

Now let's take a look at the list of all former Super Eagles coach.

ALL FORMER SUPER EAGLES COACH FROM 1949 TO DATE:

Can we call these first sets of coaches Super Eagles coach since the nickname had not been adopted as at then? Anyway, that's not why we are here. Let me go on with my list.

John Finch was an English professional footballer and manager who played as a winger in the Football League for Fulham, where he made over 280 appearances and was the first manager of the Nigeria touring team.

He led the team to its first international match against Sierra Leone on October 8, 1949, and Nigeria won 2-0.

Daniel Amobi Amadi Anyiam was a Nigerian football player and coach who was the national football coach of the country from 1954-1956 and again from 1964-1965.

Prior to training as a coach, he was a player and was the first captain of the national team in 1949.

He was also the first coach of the Enugu Rangers and was the selector for the national team after the Nigerian Civil War.

He worked in the press offices of the West African Pilot briefly and then joined the staff of U.A.C. in Lagos where he also played football.

Another Englishman Les Courtier coached the team from 1956 to 1960. He led the national team, then known as the Red Devils, to beat the national team of Dahomey (now the Benin Republic) 10-1 on November 28, 1959.

During his time with Maccabi, Beit haLevi served two terms as manager of the Israel national football team.

In 1960, Jerry received an offer to coach the Nigerian national football team, which he accepted.

In his first match against Ghana, Nigeria were thrashed 3-0 in front of 100,000 fans in Lagos and the press called for Beit haLevi to be fired.

He was also the first coach of the Enugu Rangers and was a selector for the national team after the Nigerian Civil War.

József Ember was a Hungarian football coach who managed the national sides of Ghana and Nigeria during the 1960s.

Born in Durango, Biscay,  Sabino Barinaga Alberdi moved to England in his teens at the start of the Spanish Civil War, accompanied by two of his three siblings.

Returning to his country at the end of the conflict and as another begun, Barinaga rejected an offer from Basque giants Athletic Bilbao, moving to Real Madrid instead.

Barinaga left Real Madrid in 1950 as a free agent – having appeared in his final season mostly as a central defender – then played a further three top-level seasons with Real Sociedad in his native region.

Abroad, Barinaga worked for a few months with Club América in Mexico, later managing the national teams of Nigeria and Morocco.

Barinaga died on 19 March 1988 in Madrid at the age of 65, from heart disease. He was interred at the cemetery of Almudena in the city.

Early November, after 13 matchdays with a balance of 9 defeats, three draws and only one win the club was on the last position and he was let go.

The club retained its spot in the league under his successor Günter Brocker.

This is the second time he had appointments as coach of the Nigerian national team. The first time was from 1970 to 1971 and now again in 1974.

During his time as Nigeria's coach, he was referred to as “Father Tiko”.

He was in charge of the Australian national team in their first-ever FIFA World Cup qualifying games in 1965.

He led Nigeria to two third-place finishes in the 1976 and 1978 AFCON tournaments.

He was unveiled as technical director/coach of Pioneros de Cancún on 22 June 1984, a position he held until he died in a car crash on 29 June 1985.

With the Nigeria national team, he won the 1980 African Cup of Nations.

In his first period with Benfica, the club was transformed to professional standards.

In these years between 1954 and 1959, the club won two leagues and three Portuguese Cup.

In his second tenure with Benfica, he had continuous success on the national level, winning two more championships and cups.

At the 1966 FIFA World Cup in England, he led the Portugal national team, with Eusébio, who became the tournament's top scorer, to the third place.

In the year thereafter he guided Nigeria through the 1980 African Nations Cup, which the Green Eagles won in the final in Lagos with 3-0 against Algeria, (with Enugu Rangers defence ace, Christian Chukwu Okoro as captain of the team) as well as the Olympic Football Tournament 1980 in Moscow.

Gottlieb Göller was a German football player and manager who was born 31st May 1935 and died 27th August 2004 at the age of 69 in Basel, Switzerland.

Göller commenced his playing career between 1953 and 1955 with first division side 1. FC Nürnberg.

However, he did not find use in official matches there. He continued to play until 1963 for the second division clubs Bayern Hof, VfL Neustadt, Wormatia Worms and FK Pirmasens.

When working in Togo in 1970 he was given responsibility for the national football team there through the mediation of the German ambassador.

He took the side to the African Nations Cup of 1972, the country's first participation in an international competition.

Later in the 1970s, he had a stint with the Nigerian club Julius Berger F.C. and in 1981 he managed the Green Eagles of Nigeria for just one game.

After a short time in Moçambique, he went back to Togo where he took on the national team on three more occasions, on taking it to the African Nations Cup tournaments of 1984, 1998 and 2000.

At all of Togo's participation, the team was knocked out after the first round.

Festus ‘Adegboye' Onigbinde was born on March 5, 1938, in Modakeke.

He coached Nigeria national team at the 2002 FIFA World Cup, an achievement he had already gotten, between 1982 and 1984.

In 1984, Onigbinde took Nigeria into the final match of the 1984 Africa Nations Cup. Nigeria lost 1-3 to Cameroun in that game.

Later in 1984, he took over the reins of Shooting Stars Sports Club in Ibadan and took the Club to the final of the Africa Club Champions Cup where they lost to Zamalek of Egypt.

The Nigeria Football Federation appointed the then coach of the under -20 team,  Christopher ‘Ajilo’ Udemezue of blessed memory, who qualified the team to the first-ever Nigerian soccer world cup at the under -20 level in 1983, as Super Eagles coach.

Apparently, Coach Onigbinde's result, albeit unattractive style of soccer, as opposed to Coach Udemezue's “champagne -type” soccer with the junior team, was the reason he was removed as coach of the Super Eagles.

However, Coach Udemezue, with benefit of hindsight, proved to be tactically inadequate for the Super Eagles' challenge.

And his appointment not only resulted in another failed World cup qualification journey for the 1986 World cup tournament but also marked an absolute low point in the performance and appreciation of the Super Eagles, on the African continent!

Nigerian former football Defender, Yisa Sofoluwe AKA “Minister of Defence”  was an Abiola Babes product that Chris Udemezue gave international exposure at the 83 YWC in Mexico.

As a high school student, Ekeji played in the defence for the East Central State Academicals, winners of the Manuwa Adebajo Cup in 1971.

Highlights of Ekeji's footballing career include stints with the national team, the Green Eagles; Rangers of Enugu; and Vasco Da Gama FC Enugu.

Ekeji, whose main hobby in retirement include charitable activities, is married to Ngozi Immaculata Pat Ekeji.

Paul Ebiye Hamilton was a Nigerian footballer who spent most of his playing career with NEPA Lagos.

After retirement, he was hired as coach of the U-20 national team.

He was then hired as head coach of the Nigeria national football team in 1989 but was fired after Nigeria failed to qualify for the 1990 FIFA World Cup.

He went on to coach the female national team for their first World Cup.

He got his UEFA coaching license in summer 2006.

He was said to have been diagnosed with heart and kidney-related health issues some months ago.

He had his left leg surgically removed as a result of many injuries. He died after a long illness in March 2017.

This is the second time Jo Bonfrère was being hired as a Super Eagles coach.

The coach led the Super Eagles to the 2000 African Cup of Nations co-hosted by Nigeria and Ghana.

The Nigerian team got to the finals, where they lost to Cameroon by penalties.

On June 7th 2018, Jo was given a 3 bedroom apartment by the Federal government of Nigeria as part of the promise made by the then Head of State, late General Sanni Abacha, after winning the gold medal at the 1996 Atlanta Olympics for Nigeria.

Amodu for the third time was again hired from April 2001 to February 2002 and later stated that his dismissal was “unfair”.

The Super Eagles coach also said that, a month later, he had yet to receive a formal letter confirming his dismissal.

This will be the second coming of Festus Adegboye Onigbinde who took over the Super Eagles after the sack of the coaching crew of Shuaibu Amodu following what was considered a shameful performance of Nigeria at the 2002 Africa Nations Cup.

Onigbinde took a team that consisted mostly of young and inexperienced players to the Japan/South Korea 2002 World Cup which ended up as the worst Nigerian performance in World Cup history.

That edition was the first time Nigeria did not win a single match and was knocked out of the tournament in the first round.

In the first game, the Eagles lost 0-1 to Argentina, after a goal from Gabriel Batistuta.

In the second game, against Sweden, Nigeria lost 1-2 after leading 1-0. And the third game was a goalless draw to England.

Some Nigerian players like Jay-Jay Okocha and Julius Aghahowa, after the World Cup, criticized Onigbinde for nominating the wrong players.

However, Onigbinde has served as CAF and FIFA Technical instructor.

See all Super Eagles coach list in a nutshell below: