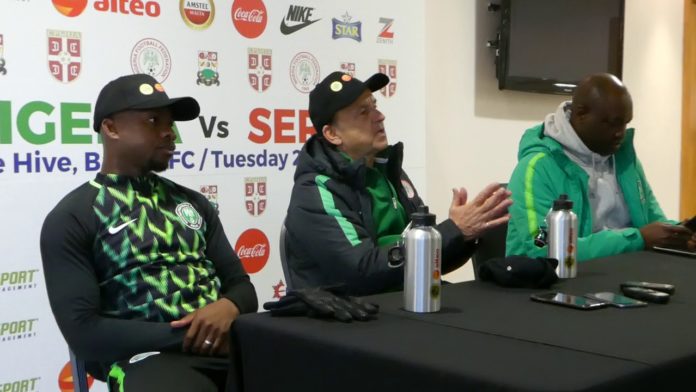 Gernot Rohr is weighing up three options for the Super Eagles pre-AFCON camp site ahead of the continent's showpiece, with Abuja, North Africa and Southern Europe all on the cards.

Footballlive claim that the Rohr has brought alive memories of how the Eagles used to camp in the sunny regions of Spain several years ago, as he is looking at an option in Europe should his desire for Abuja fail.

The Super Eagles coach said he would have preferred seeing the team camp in Abuja before heading out to Egypt for AFCON 2019, as he says it would be symbolic to train at home and get a befitting send-forth.

The Franco-German tactician is apprehensive of the facilities on offer in Abuja, which he fears would rule the Federal Capital Territory out of hosting the Eagles' final pre-AFCON camp, but North Africa remains a plausible option.

The choice of North Africa could mean the Eagles would head to Rabat, Morocco, where the home-based squad and youth national teams have been camped in recent months, as Nigeria Football Federation has a bilateral technical agreement with the Moroccan FA.

Rohr interjected: “The problem is that we don't have good infrastructure in Abuja; we don't have a good pitch to train within Abuja.

“If the stadium in Abuja is not fixed on time, then we have to go in search of alternatives.

“It should either be in a North African or Southern Europe, where it will be easier to assemble our players that ply their trade in Europe.”