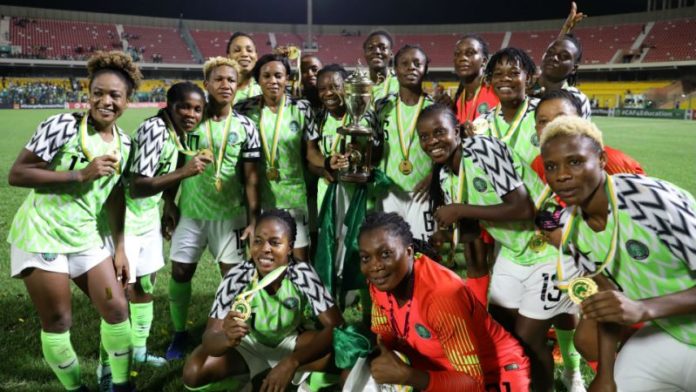 Plans by the Nigeria Football Federation for the Super Falcons preparations for the 2019 Women's World Cup in France has been unveiled.

The African queens are drawn against hosts France, South Korea and Norway in Group A, and they will be looking to break their 20-year long jinx of never surpassing quarter-final at the quadrennial football championship.

Thomas Dennerby's ladies, who secured a record ninth African Women Cup of Nations title in Ghana, are going to play up to 10 warm matches – in what could be the team's best ever World Cup build up.

First, The Falcons will compete in a four-nation tournament in China billed for January 17 to 20, 2019 and will feature alongside hosts, Romania and South Korea.

Later in February, they will for the first time participate in the 12-nation Cyprus Women's Cup invitational tournament scheduled for February 25 to March 7, 2019.

The Super Falcons must squeeze past Austria, Belgium and Slovakia in group C to stand a chance of reaching the knockout stages of the bi-invitational football tournament.

The football body further disclosed that the team will have their final camping at Avita Hotel and Resort in Bad Tatzamannsdorf, Austria – the same base of the Super Eagles before the 2018 World Cup in Russia.

The West African nation on Monday are expected to depart the shores of Nigeria for the knock-out tournament in China, where they will face the host Steel Roses on January 17.

The Falcons will begin their eighth campaign on the global stage against Norway at the Stade Augste Delaune in Reims on June 8 before playing South Korea and France.