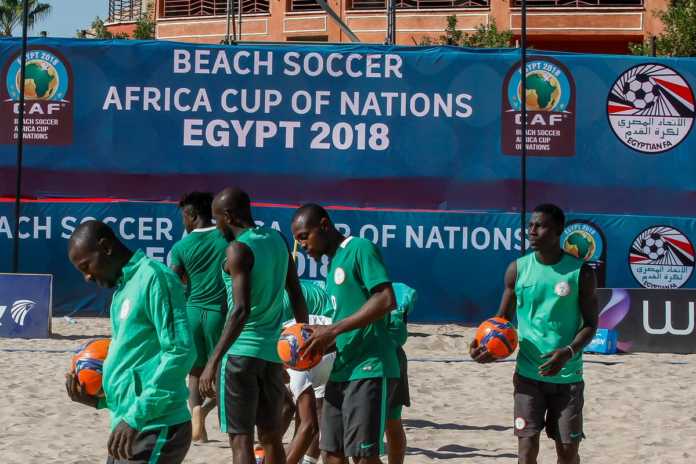 The Super Sand Eagles have accomplished their first win in Group B at the ongoing 2018 Africa beach soccer cup of nations in Egypt after defeating Libya 6-3 on Sunday.

The Sand Eagles had lost 2-0 on penalties to defending champions Senegal following a 4-4 draw after regulation time in their opening match on Saturday while Libya put five past newcomers Tanzania.

The best player of the last edition of the competition held in Lagos in 2016, Emeka Ogbonna as well as Abu Azeez both bagged a brace while Emmanuel Ohwoferia and Suleiman Ogodo got one goal each for the Eagles in the encounter.

They are now second in Group B with three points from two matches with a better goal difference of +3 over Libya who also have the same number of points.

The Audu Adamu side will face Tanzania in their last Group B game today, starting from 1.30pm Nigerian time.

In the other Group B match played on Sunday, Senegal whitewashed Tanzania 12-2 to move top of the group and will face Libya in their last group game on Tuesday.