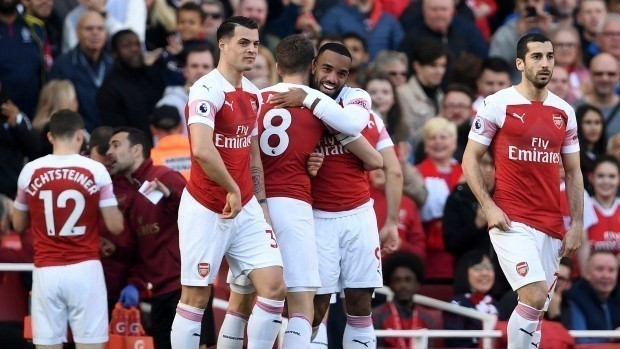 The Gunners welcome Bournemouth to the Emirates Stadium on Wednesday night in the Premier League.

Arsenal come into the game sitting fourth in the Premier League after 27 games.

Arsenal are a point above Man United, while Chelsea are three points further back.

Alex Iwobi started against the Cherries, however the winger was subbed out the match for Pierre-Emerick Aubameyang with 15 minutes to go.

“I hope it's only a knock, nothing more important,” Emery said of the Nigerian international.

Earlier in the game, Stephan Lichtsteiner was replaced by Laurent Koscielny.

The Swiss international also suffered an injury against the Saints.

Lichtsteiner was called upon as Ainsley Maitland-Niles wasn't fit enough for Sunday's fixture.

“Lichtsteiner has back pain, but I hope he can be OK for Wednesday, Maitland-Niles as well,” Emery said about his right-backs.

Of course, Hector Bellerin is now out for the season after his injury issues.

Alexandre Lacazette fired Arsenal into the lead against the Saints after just six minutes.

Iwobi set up Henrikh Mkhitaryan for Arsenal's second after 16 minutes.

? “We cannot control the results of the other teams” @UnaiEmery_ insists @Arsenal must focus on themselves in the race for the top four after the Gunners moved back into the Champions League spots with victory over #SaintsFC ?