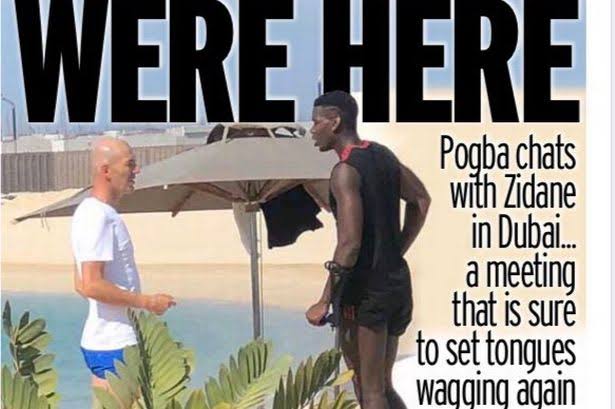 Zinedine Zidane insists that his meeting with Paul Pogba in Dubai came about “purely by chance”.

It was revealed on Friday that the two Frenchmen had met in the city, causing more speculation over Pogba’s future.

Real Madrid boss was keen to bring his compatriot to the Bernabeu over the summer, but United knocked back any attempts to prise the 26-year-old away.

The Manchester United midfielder himself admitted he was ready for a “new challenge”, but Zidane brushed aside the suggestion that their meeting over the international break was anything other than a coincidence.

“My encounter with Pogba was purely by chance,” he said, as reported by the Mirror.

“We know each other well so we talked. What we spoke about is private, a conversation between me and him. We've known each other for a long time.”

Pogba was spending time in Dubai as he continues his recovery from an ankle injury, while Zidane was in the UAE to speak at a conference about Artificial Intelligence in the sports industry.

Their encounter has heightened speculation that Pogba could swap Manchester for Madrid in the future, although the Frenchman has another two years left to run on his Old Trafford contract, with the option of a third.

United resisted Real’s advances to keep Pogba available for Ole Gunnar Solskjaer in the summer, but the Old Trafford club have begun the new season poorly.

Solskjaer’s side welcome leaders Liverpool to Old Trafford this weekend and their rivals are in terrific form, having won all of their league games so far.