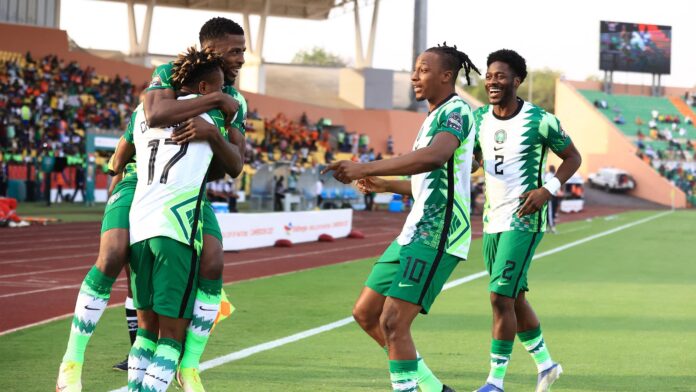 Chukwueze, Awoniyi, Simon put Sudan to the sword in a comprehensive victory.

Nigeria top the table with six points and awaits their final game against Guinea Bissau. The Super Eagles of Nigeria sealed their place in the knockout round of the Africa Cup of Nations 2021 in Cameroon with a comprehensive victory over Sudan on Saturday.

The Falcons of Jediane had promised to shock the Super Eagles when the two sides clashed on Saturday evening at the Roumdé Adjia Stadium in Garoua. Perhaps, the only surprise was the number of goals they conceded, as many Nigerian fans had expected a deluge of goals.

Samuel Chukwueze, Taiwo Awoniyi and Moses Simon all scored to pick the maximum points to see Nigeria through to the next round.

Putting Sudan to the sword

After the victory over the Pharaohs of Egypt, the Super Eagles came into the tie against Sudan supercharged and favourites to win. The team did not let their fans down.

Nigeria started the game on the front foot as they pressured Sudan from the onset and were soon ahead when Samuel Chukwueze scored, with under three minutes played. The goal set the tone for the game as the Super Eagles could relax and keep the Falcons at bay.

The Super Eagles had swooped on the Sudan defence. Chukwueze scored the fastest goal of the tournament so far. Ola Aina sent a long throw into the box that Moses Simon collected and cut back for Chukwueze to stroke home from inside the box.

The Falcons did not threaten the Nigerian defence marshalled by Troost-Ekong and Kenneth Omeruo. The second goal came fortuitously as an Ekong headed flick-on caught the head of Taiwo Awoniyi to beat the goalkeeper. The Union Berlin star claimed the goal amid protests from the Sudanese defence.

Nigeria became the first team in AFCON 2021 to score two goals in the first half.

In the 70th minute, Moses Simon scored Nigeria’s third goal, but Sudan pulled one back from the penalty spot. The goal was nothing more than a consolation goal.

🇳🇬 A big win for @NGSuperEagles against #TeamSudan.
🇪🇬 The @Pharaohs earn their first 3 points.

This is how group D looks after Matchday 2. ✌️#TotalEnergiesAFCON2021 | #AFCON2021 pic.twitter.com/KiMu3cwEbp

Nigeria could have scored more goals in a dominant display but missed a host of chances. Moses Simon, Jo Aribo and Taiwo Awoniyi were the biggest culprits.

Aribo missed the first chance. He found himself in a promising position after Chukwueze had set him up with a brilliant pass, but Aribo shot straight at the goalkeeper. The rebound fell to Taiwo Awoniyi, but the Union Berlin striker hit the upright, while Moses Simon’s follow up was cleared off the line.

With the victory, the Super Eagles will finish top of the table. The result against Guinea-Bissau in their final game becomes inconsequential to their position on the table.

According to CAF rules for the competition, article 74.1 states that in case of equality between two teams at the end of the group matches, the teams will be ranked thus. According to 74.1.1, the greatest number of points obtained in the match between the two teams concerned.

It means that should Egypt beat Sudan and Nigeria lose to Guinea-Bissau, both teams will be tied on six points, but Nigeria tops with a superior head-to-head.

Nigeria will now play the third-placed team in either Group B, E or F in the Round of 16.