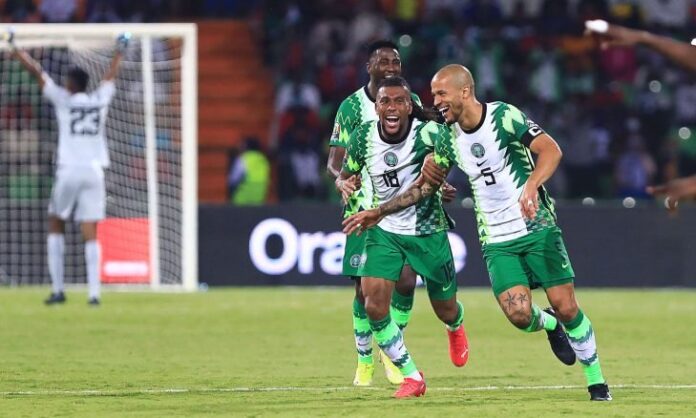 Augustine Eguavoen fielded a different side against the Djurtus but still secured a win.

Nigeria won all their group matches of AFCON for the second time, with Eguavoen also achieving the feat in 2006.

The Super Eagles beat Guinea-Bissau on Wednesday 2-0. The Nigerian lads had already qualified for the next stage following their two victories over Egypt and Sudan.

After a draw with Sudan and a painful 1-0 defeat at the hands of the Pharaohs of Egypt, Guinea knew they had an uphill task against Nigeria.

The Djurtus talked tough and wanted to cause an upset. With a changed lineup, the Super Eagles soared over the Djurtus.

Group stage conquered. On to the next round. Thank you all for your support. We stay focused. #SoarSuperEagles #Team9jaStrong #TeamNigeria pic.twitter.com/hqnJFu9N9I

Super Eagles interim manager Augustine Eguavoen rested his regulars against Guinea-Bissau. Different players, but the result was the same – a victory for the fifth-ranked nation in Africa.

Seeking a 100% record in their group stage matches, Eguavoen gave eight players their first start of the competition. Captain Troost-Ekong, midfielder Wilfred Ndidi and forward Kelechi Iheanacho were the only regulars in the starting lineup. Sadiq Umar, Chidera Ejuke, Alex Iwobi, Kelechi Nwakali, Jamilu Collins, Tyrone Ebuehi, Semi Ajayi and Francis Uzoho all made their first starts of the competition.

It means that only three players are yet to taste a minute of action for the Super Eagles. Olisa Ndah, Henry Onyekuru, Frank Onyeka and Peter Olayinka also featured, albeit as substitutes. Goalkeepers John Noble, Daniel Akpeyi and Chidozie Awaziem are the only players yet to feature for the Super Eagles in Cameroon.

Gritty Guinea-Bissau almost hold out against the Super Eagles

The Super Eagles found the Djurtus a hard nut to crack as they were strong and organized in defence. Offensively, the Nigerian side was rarely troubled, with Troost-Ekong, Semi Ajayi and Francis Uzoho snuffing out every threat the Guineas posed.

The Super Eagles settled into the game quickly and took the game to the Guineans, who were bent on not losing the game. With qualification hanging on a win over Nigeria, the Djurtus could not create much in attack and barely tested the Super Eagles.

The first half did not provide many exciting moments, with the best chance to score coming for Nigeria. Playing instead of Jo Aribo, Kelechi Nwakali meandered his way past the Guinean defence and threaded a defence-splitting pass to Sadiq Umar. With the goalkeeper at his mercy, Sadiq fluffed his lines. The UD Almeria striker rounded the goalkeeper but could not hold his ground and lost the opportunity.

The second half started with the Super Eagles increasing the tempo but always met a stubborn and unyielding defence. With ten minutes gone in the second half, Eguavoen had seen enough and was ready to make changes. Sadiq Umar was the first to be changed. With his name on the board, he pounced on to a Kelechi Iheanacho curling pass behind the Djurtus defence to tap in the first goal of the game.

Moses Simon came on later in the second half and turned out to be the difference-maker. He ran rings around the Guineans, and in one of those mazy runs, he hit the crossbar, but Troost-Ekong was on hand to tap in the rebound into an empty net.

Nigeria held on to their two goals lead and will now play against an undecided opponent in the next round. Nigeria’s likely opponent is Malawi or the third-place team from either Group E or F.