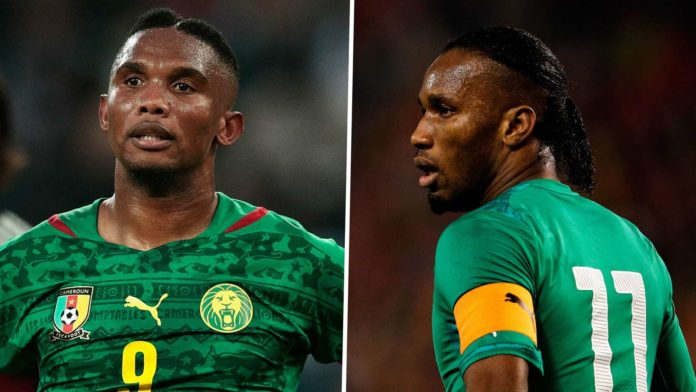 If Raafat Attia of Egypt is the first-ever player to score in the Africa Cup of Nations in 1957 against Sudan, who then are the AFCON all-time top scorers in the history of the tournament?

A list of names are going through my head right now when you talk of who the all time top scorer in African Cup Of Nations is?

Let’s find out who the top goalscorer in AFCON history is.

African Cup Of Nations All Time Top Scorers – The Top 10

The following players are all time top scorers of AFCON:

Bwalya spearheaded the Chipolopolo to an emotional runners-up place at the 1994 AFCON which was won by Nigeria.

Zambia had tragically lost their entire squad to a devastating plane crash just a year earlier – except for Bwalya who missed the flight through club commitments.

In the 1996 tournament held in South Africa, Bwalya shared the golden boot, whilst his legend was further enhanced by a FIFA World Player of the Year nomination in the same year.

Joel Tiehi has been there for Ivory Coast since 1992 but it was at the 1994 and 1998 editions that his goal scoring exploits only came to prominence.

Those two tournaments saw the former Le Havre man find the net on four separate occasions – aiding the Elephants to third place in the 1998 competition.

It is an individual record which still stands and one which earned Mulamba both the player of the tournament award and the National Order of the Leopard accreditation by President Mobutu in his homeland.

Didier Drogba consistently scored goals without ever lifting the continent’s most prestigious cup.

The former Chelsea striker’s most prosperous returns were three goals in both the 2006 and 2012 tournaments. Incidentally, those were the two occasion where Drogba acquired a runners-up medal, missing penalties in both finals.

The 2006 tournament will be a specific source of frustration where Drogba pivotally missed Ivory Coast’s first spotkick in an eventually fatal shootout with Egypt.

Hossam Hassan has remarkably tasted continental success in three separate decades having been part of victorious Pharaoh's sides in 1986, 1998 and 2006.

In 1998, the striker, alongside South Africa’s Benni McCarthy, was awarded the golden boot following seven tournament strikes – including two against hosts Burkina Faso in the semi-final and a group stage treble that dismantled Zambia.

Patrick Mbomba was joint top scorer at both 2002 and 2004 Cup of Nations. Aside from being a prominent member of Cameroon’s momentous Olympic triumph at Sydney 2000, Mbomba can boast AFCON winners medals from the 2000 and 2002 editions.

Hassan El-Shazly scored six goals in the 1963 AFCON – the pinnacle of the Tersana legend’s international exploits.

Despite holding the record for goals by an Egyptian at Africa’s grandest stage, the AFCON is however a competition doused in frustration for El-Shazly.

Rashidi Yekini is Nigeria’s greatest-ever goalscorer. In three tournaments, between the period of 1990 and 1994. Yekini, the first Nigerian to score in a World Cup, contributed 13 goals – topping the goal rankings in both 1992 and 1994.

A runner-up in 1990 and frustratingly left to clutch a bronze medal two years later. 1994 finally represented fulfilment for the Super Eagles and Yekini was elected player of the tournament.

As an aside, you can see all the jerseys worn by the Super Eagles from 1994 till date in this post.

For two Africa Cup of Nations Pokou tore the continent apart, contributing a combined 14 goals in just eight fixtures – including five in a single clash with Sierra Leone.

Pokou’s destruction couldn’t quite fire Ivory Coast to the ultimate prize, with the Elephants falling at the semi-final hurdle in both 1965 and 1968.

Despite the lack of silverware Pokou’s influence on Ivorian football is simply immeasurable.

What a lethal finisher Samuel Eto’o used to be! And the success he brought the Indomitable Lions of Cameroon is unimaginable.

GoalBall will be handy and ready to make an update should Eto’o’s record ever gets beaten.

Meanwhile, let me now reel out the list of all African Cup of Nations all-time top scorers.

I limited them to those who scored five goals and above. Anything thing less than five won’t help this list.

The Super Eagles of Nigeria, who were the defending champs, were not allowed to appear at the 1996 AFCON in South Africa owing to political instability during the General Sani Abacha military regime.

IMO, if Yekini had been at that tournament, going by the foregoing fact that Nigeria were defending champions; the fact that he had a very high tendency of scoring in every game; the legendary striker, Late Rashidi Yekini’s goal tally would have surpassed that of Eto’o to make him – not one of AFCON all-time top scorers, but the top scorer!