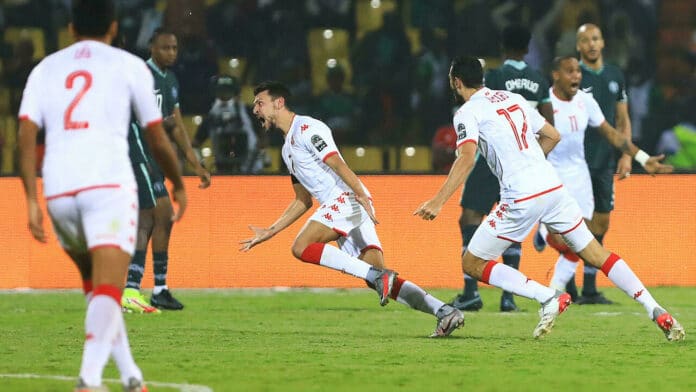 The president of the Federal Republic charged the Super Eagles of Nigeria to beat the Tunisians.

Tunisia will play Burkina Faso in the quarter-finals on Saturday.

The African Cup of Nations is over for the Super Eagles of Nigeria. The Tunisians defeated the Super Eagles on Sunday night by a lone goal. It was a game that saw the West African giants fail to get into gear till it was late.

The Nigerian side won the bronze medal in their last outing in 2019, where they beat the Tunisians in the bronze medal match. The focus now shifts to the World Cup qualifying match against the Black Stars of Ghana in March.

On Sunday, the Super Eagles came to the end of the road as they chased a fourth AFCON title. The Super Eagles were scintillating during the group stage but failed to turn up on the night.

Perhaps, if Maduka Okoye was a bit more calculative, the long-range shot by Tunisian hitman Youssef Msakni would have been a routine catch. The flight of the ball deceived the Nigerian shotstopper.

The second half was barely underway before Youssef Msakni got the ball from way outside the box and unleashed a shot that took a slight swerve and beat goalkeeper Maduka Okoye in goal for Nigeria. It brought out the fire in the Super Eagles, and they went all out for the equalizer. The Tunisian defence thwarted the efforts by the Nigerians.

Nigeria’s efforts were made doubly hard by the expulsion of Everton midfielder Alex Iwobi midway into the second half. Iwobi had come on for Kelechi Iheanacho, who had a torrid evening trying to get past the Tunisian defence.

Iwobi was barely on the pitch before receiving his marching orders following a VAR review by the Senegalese referee. The Super Eagles made a fight of it and came close on a few occasions with ten men on the pitch. The artfulness of the Tunisians and the poor officiating by the referee proved a stumbling block.

Umar Sadiq changed the game for the Super Eagles with his directness. On a couple of occasions, Umar came close to getting the equalizer for Nigeria. Tunisians rarely troubled the Super Eagles, despite being reduced to ten men. They walk away with a barely deserved victory.

A game to forget

The Super Eagles in the group stage had produced a fantastic advert for African football, but the show on Sunday night was a poor one for the continent.

The Tunisians came with a game plan best described as anti-football. They tried to slow the game and forced the Super Eagles to play at a pace comfortable for them. The Super Eagles saw the 50-50 balls going the way of the Tunisians. The referee frustrated the Nigerians with his decisions. It led to Kelechi Iheanacho and Wilfred Ndidi protesting vehemently.

At the slightest touch, the Tunisians found a bed on the turf. The antics frustrated Iheanacho. The referee looked the other way when the Nigerians were at the end of the same type of tackle.

Particularly irking was the red card to Iwobi, who looked to shield his ball. Another frustrating moment was the referee refusing to stop play after intercepting a pass from Wilfred Ndidi to the chagrin of the Leicester City midfielder.