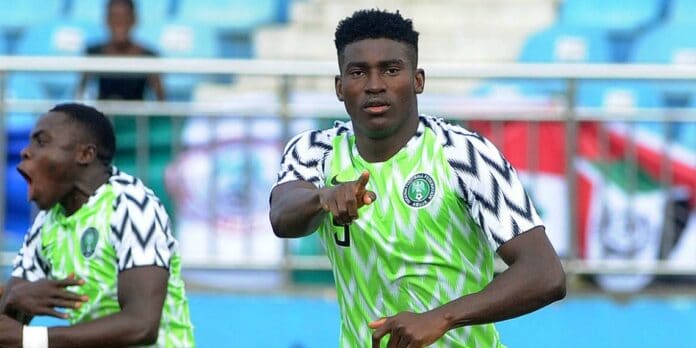 Awoniyi scored a random goal from the three appearances made at the tournament.

Gernot Rohr may no longer be the coach of the Super Eagles, but the German gaffer maintains a keen interest in their affairs. The Africa Cup of Nations is over for the West African giants. They crashed out in the round-of-16, where they lost to the Carthage Eagles of Tunisia.

Though not attached to the Super Eagles, Rohr monitored their progress in Cameroon and made a few observations in the team. The Super Eagles lacked bite in a muted attacking performance against Tunisia. It was the only match the Super Eagles failed to score at the AFCON.

Despite the pain of the loss, Rohr sees some positives in the team. He dropped his two cents on the Super Eagles. The German earmarked Taiwo Awoniyi for commendation and explained why things didn’t fall in place for the former under-17 star.

While many Nigerians are busy picking holes in the Super Eagles and pointing accusing fingers at different players, former Super Eagles coach has decided to focus on the positives. The former coach of the team was impressed with some Super Eagles players, but he singled out Taiwo Awoniyi for praise. Rohr claims to be impressed by the performance of the Bundesliga star at the Africa Cup of Nations.

According to Rohr, even with the odds stacked against Awoniyi, he could still raise his head high with pride. Awoniyi got the responsibility of leading the Super Eagles attack at AFCON. Awoniyi got the role following Victor Osimhen, Odion Ighalo, Paul Onuachu and Emmanuel Dennis' absence. The following players were absent due to a combination of injuries and their clubs refusing to release them.

Awoniyi failed to light up the scene with goals, and he scored a random goal in 214 minutes of action across three matches. Despite this, Rohr praised his work in hold up play and being a nuisance to the opponents. The German gaffer refused to rate him based on statistics which he feels does not record the impact Awoniyi had on the pitch.

A good tournament for Awoniyi

Speaking with Sportschau, a German sports magazine on broadcaster ARD, Rohr said the Super Eagles were disappointing against Tunisia, and the loss was a surprise to him. He believes Nigeria had the tools to have beaten a depleted Tunisia. In the interview, he praised Taiwo Awonyi saying, he had a good tournament.

While many may disagree with Rohr, the German was unequivocal about his assertions on Awoniyi. Rohr, who handed Awoniyi his Super Eagles debut, feels that despite his performance, he did not blend with the team. He explained why he feels Awoniyi failed to integrate with the other players.

Rohr said that Awoniyi has not been with the team for long. He said it was the reason he did not link up well. The Union Berlin star has been banging in the goals in the Bundesliga, but at AFCON, the goals dried up. Rohr, however, believes he has the potential but fell short in coordination with the team.