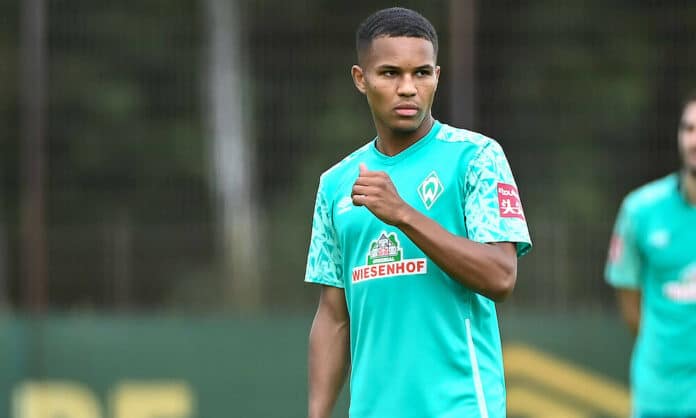 After snubbing Nigeria, Agu is ready to for Super Eagles call-up

The 22-year-old defender claims he didn’t snub Nigeria but wanted to be prepared for the team first.

Nigeria have a plethora of talent scattered all across the world. Management has been the bane of the country and the managers of its football. The number of footballers of Nigerian descent that have turned out for other countries is baffling. They are more than enough to make up a World Cup challenging squad, but somehow Nigeria managed to countries with better run associations.

Agu looking to play for Nigeria

Many Nigerian players have regretted playing for countries other than Nigeria. Many times they are kicked to the kerb after a few games. Werder Bremen star Felix Agu has realised this and wants to avoid a situation like John Fashanu and Gabriel Agbonlahor.

After turning out for Germany at the under-21 level, Agu can still play for Nigeria at the senior level and wants to avail himself of the opportunity. The Nigeria Football Federation (NFF) approached the defender to represent his fatherland, but he turned his back on the NFF.

Born to a Nigerian father in Germany, Agu opted to play for Germany’s youth team, and he featured twice for the European country between 2019 and 2020.

A change of heart

With his experience in Germany, Felix Agu has had a change of heart and is now prepared to play for Nigeria. The full-back, who has a promising future, has made it clear that he is willing to switch allegiance to his fatherland.

Felix Agu has become a regular for Werder Bremen this season is waiting for the Nigeria Football Federation (NFF) to make that call inviting him to join the Super Eagles.

According to the defender, he hasn’t heard anything for a long time. Speaking with Deich Stube, Agu said when the NFF called, he turned down their request because he wasn’t ready and wanted to go to the German U21 first. He, however, hopes they will make another call.

The defender further stressed that he wanted to get used to a national team first before linking up with the Super Eagles. Now that his U21 career is over, he is prepared and ready for Nigeria.

Agu claims that his decision to turn out for Germany U21 first was not against Nigeria but to prepare him for the future. He is now open to the discussion.