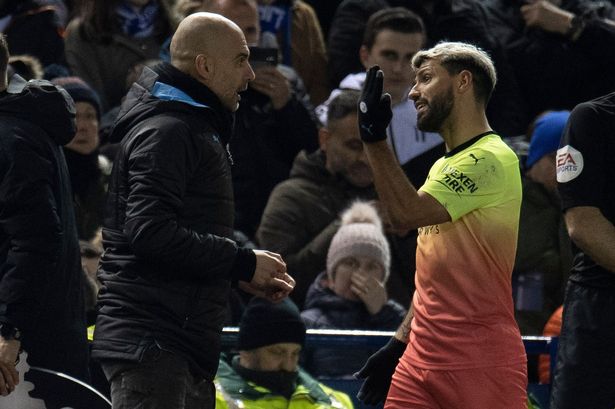 Sergio Aguero has revealed that Pep Guardiola advised him on his movement after being substituted in Manchester City's victory over Sheffield Wednesday.

The Citizens are through to the FA Cup quarter-finals after coming through a dull affair at Hillsborough with a 1-0 win to set up a trip to Newcastle United.

It was Aguero who got the decisive goal just after half-time and would later be substituted with minutes remaining of the game.

But upon his withdrawal, he had a lengthy conversation with Guardiola on the sideline which was spotted by television cameras.

Aguero has revealed that his manager was just offering him some guidance on his game.

“He says when Riyad or Bernardo receive the ball, move in behind the centre-back because he's focused on that, it's fine,” Aguero told the BBC. “Always he's a good manager and crazy!”

It was a tough game to watch at times and the Argentine has heaped praise on Wednesday for making it difficult for the Blues.

“Yeah so we know it's a very tough, that pitch is too difficult, but the important is that we won and qualify for the next round.

“They are a good team, they are tough and have a very good defence and they're going to well in the Championship.”