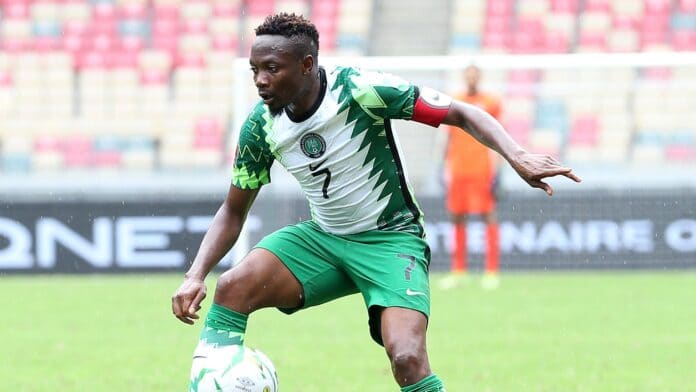 Super Eagles captain Ahmed Musa has backtracked on his comments to retire from playing for Nigeria in the African Cup of Nations.

Earlier in the year, the Fatih Karagümrük forward claimed that the two tournaments this year – the 2021 AFCON and the 2022 FIFA World Cup – were his last tournaments for Nigeria. Nigeria failed to get past the Round of 16 in the AFCON following a 1-0 loss to Tunisia and failed to secure a ticket to the World Cup in Qatar after losing to Ghana on away goals in their qualifiers tie.

His comments were interpreted by Nigerians to mean his retirement from the national team but he debunked them in another interview. But it was unclear what he meant as it implied he would only represent the country at friendlies and not tournaments.

Following his inclusion in the 2023 AFCON qualifiers, the 29-year-old forward has now declared himself available for selection for the Cote d'Ivoire tournament.

Musa, who is currently with the Super Eagles in Abuja preparing for their AFCON qualifiers against Sierra Leone and São Tomé and Príncipe, said at a press conference before their first game which will be against Sierra Leone: “That's what I said but I've not said I've stopped in the national team. The coach knows that I have something to give and that's why I came.

Musa is one of the few surviving members of the squad who, under the late Stephen Keshi, won the 2013 AFCON title to seal Nigeria’s third continental glory. Musa holds the all-time record for most appearances for the national team with 105 matches from September 2010 to date.

He is also the leading goalscorer at the FIFA World Cup for Nigeria with four goals.

Touted as Nigeria’s best goalkeeper abroad, Adeleye has been on the fringes of the team as one of the goalkeepers who was always being considered but never actually given a callup. It seems to be a new dawn for him with Peseiro as the national team’s manager because the Portuguese has been impressed so far with his showings in training.

Eguavoen, who coached Adeleye at the under 17 level for Nigeria, posted a short welcome message via his Twitter page for the young goalkeeper. “Welcome to the Super Eagles, Leye. Wish you the very best on this new career highlight,” the 1994 AFCON winner tweeted.

Adeleye faces competition from Francis Uzoho and Adewale Adeyinka in the current squad and will also have Maduka Okoye to deal with when the Watford goalkeeper returns to the squad. But with a fresh new start for the team under Peseiro, he has the best opportunity to show his talents and secure the confidence of the team’s handlers.