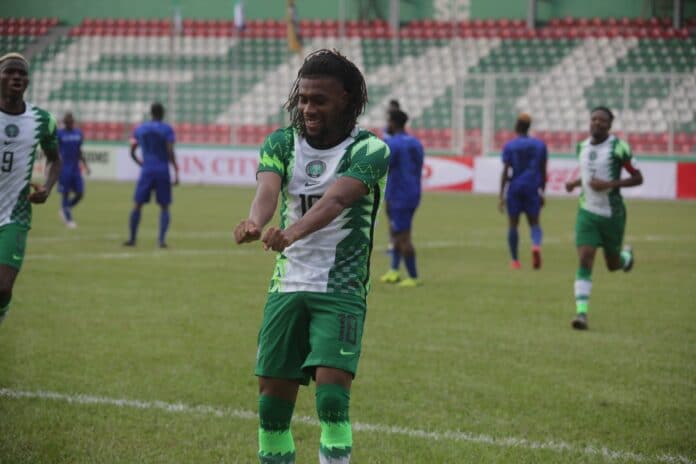 The group stage of the Africa Cup of Nations is over, with the crunch games coming up in the next round. For the Super Eagles, it has been a scintillating journey so far, with the African giants the only team in Cameroon to win all its group stage matches.

The feat in the group stage where the Super Eagles beat highly fancied Egypt before putting Sudan and Guinea-Bissau to the sword is an achievement worthy of note. Despite the feat, the team has won nothing yet.

Almost every Super Eagles player to the Africa Cup of Nations has had a kick of the ball, thanks to Augustine Eguavoen giving a run out to the fringe players in their last game against Guinea Bissau. The only players not to have taken to the pitch are goalkeepers John Noble (Enyimba), Daniel Akpeyi (Kaizer Chiefs) and defender Chidozie Awaziem (Alanyaspor).

While the players are excited to have tasted action and achieved success on the pitch, one player feels that his best is yet to come. He believes he has operated from a position that denies him the opportunity to showcase his true qualities. Alex Iwobi believes that he can contribute more if played in his preferred role.

Alex Iwobi is a player that arrived at the Super Eagles amid much fanfare. The former Arsenal player has so much to offer, but all are still in a dilemma where best to fit him on the pitch. Alex Iwobi recently tried to put the argument to rest.

The 25-year-old midfielder said though he is open to playing in other positions, his best will come when he operates in his natural role. Iwobi said he prefers to play the number ten role.

The Everton player has crisscrossed several positions across the pitch. He has played on the left and right-wing. He has also played in attacking midfield, central midfield and as a wing-back at Everton. The debate continues to rage over where Iwobi will be best suited.

Ever since he arrived in the national team, Iwobi has failed to live up to expectations. The midfielder’s performances in the various positions played have not been consistent. Iwobi started his Super Eagles career owning the number 10 shirt and was to take over the play-maker role from John Obi Mikel.

Despite the enormous responsibility placed on his shoulders, Iwobi has not delivered. He has turned out inconsistent performances. Iwobi played as a winger against Guinea-Bissau. He later drifted into the creative midfield position in a tactical switch.

Speaking in an interview, Iwobi stated that he prefers to play as a number 10, but he is ready to sacrifice for the team and play in any role he is required to play. According to the former Arsenal player, he will always give his best.

Iwobi has played twice at AFCON – one as a sub. The midfielder will hope he plays an essential role when the Super Eagles take on Tunisia in the second round on Sunday.