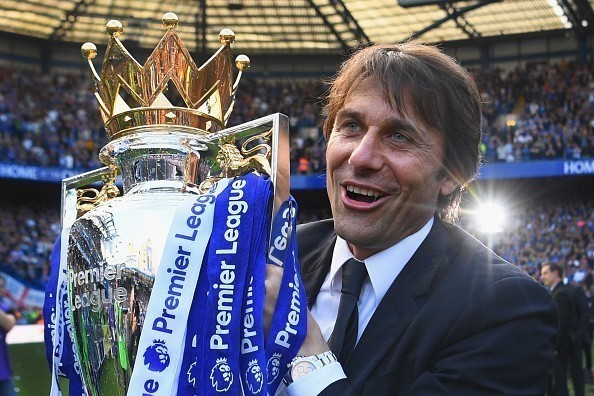 How many trophies has Antonio Conte won in his career as a coach?

Conte, born 31, July 1969, is currently one of the top managers in the world, with his recent success speaking volumes.

The Italian tactician usurps Juventus from their decade-long reign as Serie A champions before leaving the club for a bigger challenge.

This article will be presenting a rundown of Conte's achievements.

Antonio Conte Trophies As A Coach

Antonio Conte started his coaching career with Arezo, a Serie B-based club, in July 2006 at the age of 37 years old. Unfortunately, he could not deliver according to the club's expectations which led to his sack in October.

He was called upon to manage the same club in October 2007 as the club's former coach Maurizio Sarri also failed to lead the team from their battle with relegation spot.

Although Conte led the team to a run of ﬁve wins, so much damage has been done, leading to the team's relegation to Serie C 1.

Following Arezzo's demotion, Conte was appointed as coach of Bari in December 2007 during the second half of the team's Serie B campaign of the 2007/2008 season.

He led the team to Serie A top-flight football as they became Serie B champion in the 2008/2009 season.

In June 2009, his contract with the team was extended, but on the 23rd of June, the club announced that they ended Conte's contract based on mutual agreement.

Antonio Conte became the manager of Atalanta in September 2009.

At the helm of the Orobici, the club had a good start, but they were already struggling by November, which made their local supporters unhappy.

In January 2010, Conte was confronted severally by the club's fans during a match against Napoli where the team lost.

Conte had to leave the stadium with police protection to not have an altercation with the supposed fams.

The following day Conte resigned from the club.

Antonio Conte became the coach of Siena in May 2010.

The club has been relegated to Serie B in the 2010/2011 season, and Conte's goal was to lead the club back to the top ﬂight League, which he successfully achieved as he led the club to Serie A in the 2011/2012 season.

Antonio Conte was announced as the Juventus Coach in May 2011, sparking celebrations among fans.

He met their expectations by leading them to 28 unbeaten matches to equal the record of unbeaten games as a manager first set by Fabio Capello.

Conte also led the team to the Coppa Italia ﬁnal on the 20th of March 2012 and became the ﬁrst coach to do so since Marcello Lippi in 2004.

He won the league for that season to give Juventus their 28th league.

The team ﬁnished the league unbeaten after beating Atalanta on the final day to complete an Invincible season.

However, this same season, the team suffered a woeful UCL run that saw them crashed out on the group stage.

The team eventually made up for their UCL meltdown by reaching the UEFA Europa League ﬁnals, which they eventually lost at penalties.

Antonio Conte resigned as the team's manager at the end of the season.

Conte employed the ﬁeld formation he used at Juventus while coaching the team, and he was able to win his first match after defeating the Netherlands.

Conte also defeated Norway in the Euro 2016 qualifying match in September 2014, in his ﬁrst competitive match, making it the ﬁrst win against the Norwegians since 1937.

The team defeated Azerbaijan in October 2015, which qualiﬁed them for Euro 2016.

In Euro 2016, the team opened the tournament with a victory over Belgium.

Conte finished the group at the top, but Germany eventually defeated Italy in the quarterﬁnals.

After the loss, Conte was contacted by Chelsea. He accepted the offer, ending his stint with the Italian national team.

Let's now move over to Antonio Conte's trophies at Chelsea.

The team eventually suffered defeat in an away match to Tottenham Hotspur.

Nevertheless, Chelsea won the league for the season and broke the record for the club with the most wins in a single season.

This enabled Conte to sign a new two-year deal with the club. Conte led the team to win the FA Cup ﬁnal, where they won the match against Manchester United in May 2018.

Antonio Conte was sacked in July 2018 as Chelsea's manager as the club was unable to qualify for Champions League after finishing the season in the fifth.

In May 2019, Antonio Conte was made the head coach of Inter Milan, and Under his leadership, Inter Milan ended Juventus 10-year-grip on the Serie A title.

Following what would have been a flourishing season after the win, Conte resigned after the club stated that they would be offloading players to cut on the wage bill.

Throughout his coaching career, Conte has won a lot of personal awards totaling up to 17.   He was awarded the Panchina d'Argento in the 2008/2009 season while coaching Bari.

He was awarded the Trofeo Tommaso Maestrelli for the best Italian manager in the 2011/2012 season and won the Globe Soccer Awards for the Best Coach of the year 2013.

In 2015 he was awarded the Gazzetta Sports coach of the year for his performance as the coach of the Italian national team.

In 2017 he also won the Special Achievement GQ Men of the Year award. In addition, Conte came out in second place in the 2017 Best FIFA Men's Coach.