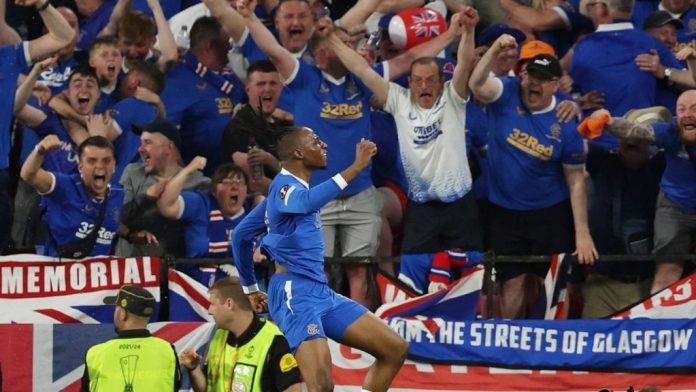 Former Wolverhampton Wanderers striker Kenny Miller has opined that Super Eagles midfielder Joe Aribo is ripe for a move to the Premier League.

The Glasgow Rangers man was the most used player in football last season, playing 71 games for club and country. It is a number that could have been more if he played for Rangers in January but he was away with the Super Eagles at the 2021 African Cup of Nations in Cameroon at the time.

He was key to their great season which saw them go all the way to the final of the UEFA Europa League where he scored the opening goal for Rangers. The Scottish club ended up losing the game and the title, but made up for it days later when they beat Heart of Midlothian in the Scottish Cup final.

He is a cherished member of Giovanni van Bronckhorst's side and the Gers are trying to get him to renew his contract which runs out in 2023. Aribo is uninterested in those talks, however, as he has his sights set on a move to the Premier League.

He has quite a number of clubs following his progress and the move is only a matter of time. Miller has now advised Rangers to let him go now so that they can cash in on him while he is still worth some money to the team.

Crystal Palace, Southampton, Aston Villa, Everton and newly-promoted side Nottingham Forest, who recently signed his international teammate Taiwo Awoniyi for £17 million, have all been linked with Aribo. Rangers value the 25-year-old at £10 million, which is a big jump from the measly £300,000 they paid in 2019 to acquire him from Charlton Athletic.

What has been said

Miller, who played for both Rangers and Celtic in his days, believes that the midfielder is good enough for the Premier League and that an offer of £8 million for his signature will be good business for Rangers.

“Joe is now at a good age,” Miller wrote in his column for a Scottish tabloid. “If you profile him, he has everything a Premier League club would want. With a year left on his contract, teams won’t be stupid with potential bids. Rangers will have a valuation of what he’s worth and it’s about whether they can find that common ground with a buyer.

“Aribo, Alfredo Morelos and Ryan Kent are all going into their last year. They’re all starting players so you don’t want constant speculation. It can sidetrack the player and become a sideshow for the manager who gets asked about it every week. So I’d like to see Aribo’s situation resolved quickly. Either re-sign him on a new deal or if the board are willing to sell, let’s bring in the most money we can.

“London probably makes sense for Joe because it’s where he grew up. He will have ambitions of playing in the Premier League. And of those three players at Rangers, you have to think at least one will move on. Joe only signed for around £300k. If Rangers can get around £8million for him it’s good business.

“That’s the model every club wants. You sign cheap – the same way Celtic did with Moussa Dembele – and sell big. Clubs need to balance the books and Rangers are no different. Right now, Aribo is still an asset. But if it gets to Christmas time and nothing’s happened, he’ll probably leave for nothing.

“It’s all about timing. If it’s right for the player and club, maybe now is a good time for him to go.”