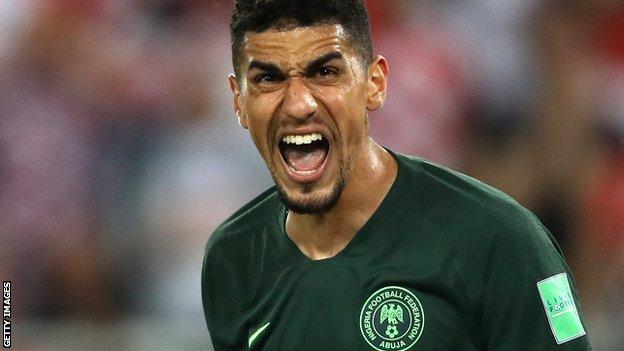 Super Eagles defender, Leon Balogun, has shared his thoughts on the country’s failure to qualify for the ongoing 2022 World Cup in Qatar.

The Eagles blew their chance to reach football’s greatest showpiece after playing a 1-1 draw with archrivals Ghana at the Moshood Abiola Stadium in Abuja during the qualifiers back in March.

Thomas Partey handed the Ghanaians the important away goal in the 10th minute after Francis Uzoho failed to deal with the long-range effort before stand-in captain William Troost-Ekong equalized from the spot. Meanwhile, the first leg had ended in a goalless draw in Kumasi.

In the end, the three-time Africa champions failed to score the all-important goal to secure a place at the Mundial in Qatar, leaving fans devastated.

Balogun, in his interview with The Beautiful Game podcast, opened up on the team’s inability to edge their perennial West African rivals in the race for the 2022 World Cup ticket.

Balogun said, “It’s the first leg, we did not score, that would have changed the whole picture probably.

“It’s a bit funny because that season the away goal-rule was scrapped everywhere. I don’t know why they didn’t do it in Africa. I have no clue, until this day, I don’t understand.

“We did go to Ghana to play that first leg and it was a tough game. There was this whole fuss about them changing the stadium last minute where they’ve never lost, and they said whether juju may or may not have been involved.

“It was really, really tough and we ended up playing 0-0. I remember we had a meeting one or two days after and one of the staff said we’re 70 percent through and I thought to myself that can’t be right.

“We played a goalless draw away from home, if that’s helpful to anyone then it’s Ghana. We said we have to just pour our hearts out for that game.”

Balogun will hope to return to action when QPR host Burnley on Sunday in the Championship.