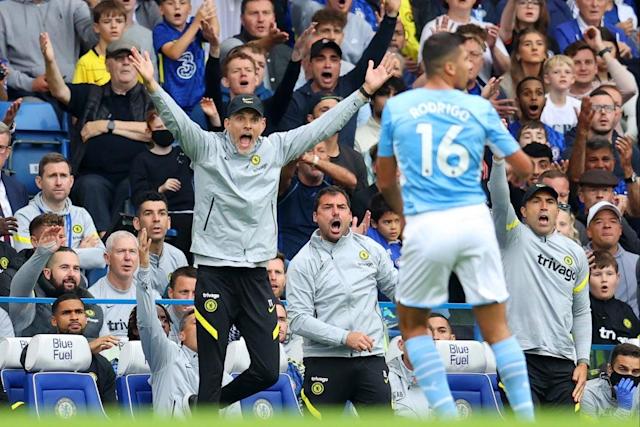 Manchester City squared up against Chelsea at Stamford Bridge as the top of the table clash ensued between both Premier League sides.

The Blues were the favourite going into the game but you never know what sort of tactical gimmicks that a Coach of (Pep) Guardiola's calibre could produce in games like this.

In the end, it was the Citizens that claimed the three points away from home after much of the favourite tag and bragging rights (pre-match noise) from Chelsea football club.

Following the win for Pep Guardiola's Manchester City,Goallballlive.com evaluate the three (3) massive observations as Chelsea loose 0-1 at home in one of Saturday's early kick-off in the Premier League.

The battle between Chelsea and the Manchester City side was a closely contested affair between the 22 players on the pitch.

But the input both managers made in the game was evident in the entire 90 minutes of football.

Playing at home was expected to give Chelsea the leverage in this tie but it wasn't the final story as Pep Guardiola engineered the tactical dynamics that saw the Blues defence erupt with striker Gabriel Jesus netting the winner early on after the intermission.

It was City boss Guardiola that made most of his game plan thus beating Tuchel in the match strategy he employed for the contest.

The Blues were actually the second-best for much of the contest as Manchester City were dominant in possession despite playing away from the Etihad Stadium.

It was relatively evident for all to see as Kevin De Bruyne was the dominant person in the central areas of the pitch plunging passes forward across to British record signing Jack Grealish who looked dangerous in the Chelsea area countless times.

Such was how good the Citizens were as Chelsea mainly made advancement high up the pitch much in the second half after the introduction of German star Kai Havertz in Chelsea's attack.

DEFENSIVE PLAUDITS FOR CHELSEA THOUGH

Chelsea was resolute in defending as it was their game plan to frustrate (majestic Pep) Guardiola's possession style of play and hit them on the break.

Though the agenda could not work out the way Chelsea and Thomas Tuchel may have wanted it.

But in all regards, Chelsea's defence line needs much commendation just as Edouard Mendy was superb in between the sticks winning every ball that's within his range.

Chelsea's pair of Thiago Silva and his partner Antonio Ruediger was in terrific form at the back with the former preventing the ball off the line.

That clearance kept Chelsea in the game for much of the contest as the Blues would have lost with a higher goal margin.

Ruediger's performance will see him attract further bids as the interest in his services continues to rise with reports linking him to a home return to join Bayern Munich or Carlo Ancelotti's Real Madrid still very much on the card.