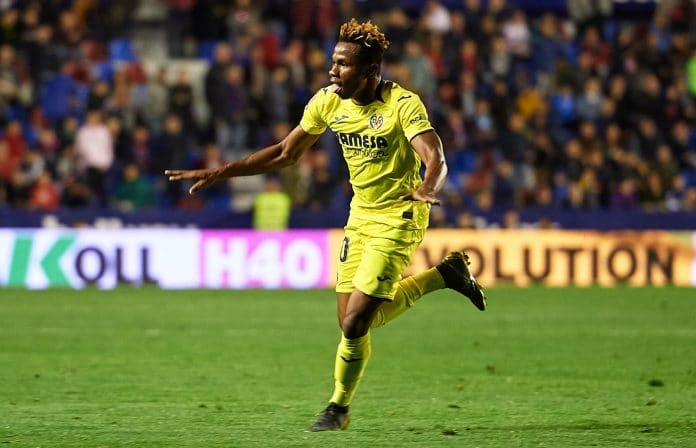 Villarreal winger Samuel Chukwueze has attributed his goal which knocked Bayern Munich out of the UEFA Champions League to his manager, Unai Emery's instructions.

Chukwueze scored the equaliser in the 1-1 draw against Bayern Munich in Germany in Tuesday's second leg quarter-final tie between the German giants and Villarreal which turned out to be the winning goal that sent the Yellow Submarines through to the semi-finals for the first time in 16 years.

The Spanish side won 2-1 on aggregate in what was the write-off fixture of this season's UCL to the shock of football fans all across the world.

Chukwueze came on as a late substitute for Nigerian-born Netherlands winger Arnaut Danjuma, who scored the only goal of the first leg, and in the 88th minute, finished a flowing Villarreal counter attack to grab the semi-final ticket.

Moments before coming on, Chukwueze was seen receiving instructions from Emery, like all substitutes get from their coaches before joining the game.

After the game, the 22-year-old winger was asked what Emery told him before sending him on and if it helped him score the goal. Chukwueze said the instruction was a pretty straightforward one.

“Run! He just asked me to run. When you don’t have the ball, just run. That’s what he told me,” said the Nigerian international.

It was a brilliant run in behind the Bayern defenders that gave him the space which he exploited to place one past legendary goalkeeper Manuel Neuer and send Villarreal to the semi-finals, where they await either Liverpool or Benfica.

The 2019 African Cup of Nations bronze medalist also talked about the game.

”It’s not a bad night, I think so. It wanted to be a bad night but… it turned out well.

”I think it’s a very great moment. One of the best of my life. The best thing that happens in life is football. I’m so so happy and the team is happy and the fans… they are still singing. That means the goal means a lot to them.”

Elsewhere, FourFourTwo magazine has named Victor Osimhen as the fourth best player in Serie A.

A number of Nigerians abroad are having the best seasons individually in all the various leagues they play for. Osimhen, who has been on the world's radar since his LOSC Lille days, is arguably one of the best performing Nigerians abroad at this time.

Despite a serious injury limiting him to only 21 of the 32 Serie A games so far this season, the former Charleroi striker has 12 goals and is Napoli's highest goalscorer in all competitions this season.

He has been praised by pundits, players and rival managers, as well as the Serie A leadership, who awarded him March's player of the month as the second Napoli player to get the award this season.

FourFourTwo described their position in ranking Osimhen number four in the Serie A players power rankings.

“Osimhen’s goals have been the ammunition to Napoli’s assault on the league title this season, although the Nigerian has had another injury-disrupted year,” the magazine stated.

“The 23-year-old was badly missed when he spent two months on the sidelines with a fractured cheek between November and January, but he’s been in formidable form since returning.

“Osimhen has six goals in seven games since returning to the starting line-up at the beginning of February, including back-to-back braces in his last two games.”

Osimhen is currently spearheading the Partenopei's title charge as they are locked in a three-horse race for this year's Scudetto with the Milan clubs AC and Internazionale.