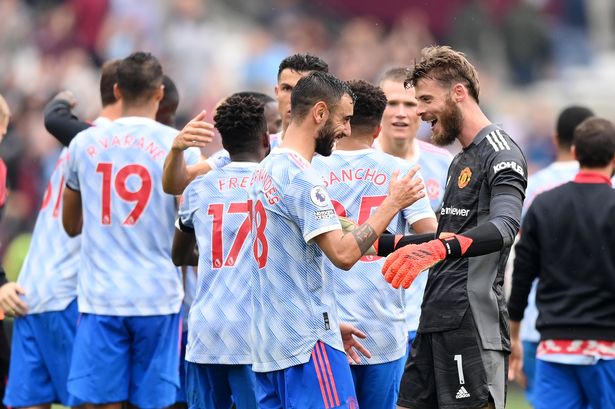 The English international who spent the second half of last season on loan with The Hammers to reignite came on board to sink his former side who also missed a penalty after his goal.

A neck-to-neck first period witnessed a whole lot of goalscoring opportunities but it was David Moyes' side who got on the score-sheet first through Said Benrahma.

The hosts took the lead on the half-hour mark through the Algerian Benrahma who unleashed a long-range drive that took a wicked deflection and left De Gea wrong-footed.

Ronaldo continued to trouble West Ham's side constantly, forcing two more terrific saves out of Fabiański on either side of HT, whilst de Gea comfortably denied Souček as the hosts had a rare sight of goal.

There was not, however, the same potency after the break as there had been before it, leading to both managers to utilise their substitutes. And it was one of them, Lingard, who cruelly stole the points for the visitors and giving the West Ham fans mixed feelings.

The England international was picked out in the box and dipped past Kurt Zouma before smashing a stunning shot that rifled into the top corner.

In the dying moments, substitute Mark Noble was invited into the game to specifically score the penalty won by Yarmolenko when his cross went straight to the arm of Luke Shaw.

The penalty was however saved by De Gea – and this was the Spaniard's first penalty to be saved in seven years.

The result extends United's English league record to 29 away matches unbeaten as they keep the pace with Liverpool at the top of the table, whilst West Ham remain on eight points after suffering their first defeat of the campaign and Moyes' eighth loss to The Red Devils after being sacked by the club in 2014.