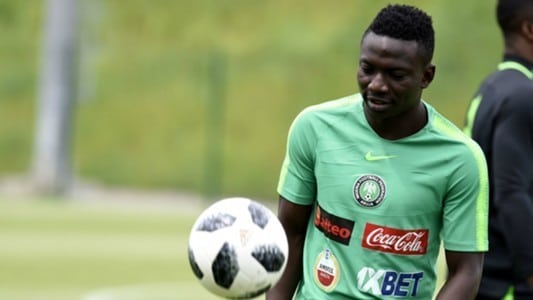 Super Eagles midfielder Oghenkaro Etebo has revealed that moving to English Championship side Stoke City was a decision he made on his own and he believes will further boost his market value in the future.

Football fans across Nigeria were shocked when the football star moved to Stoke City just three days before the Russia 2018 World Cup with many believing that playing for the Eagles at the Mundial would have increased the number of suitors.

Etebo in an interview with footballive.ng said. “I didn’t rush to join Stoke City, It was my decision, I’m still going to say it to everyone, I had other options from the Bundesliga, the Spanish La Liga and even from the premiership but I decided to go to Stoke and the reasons are best known to me.

“It wasn’t a rush, it wasn’t also a mistake, I took the decision and I’m happy with it.”

The Super Eagles utility player says he is relishing the experience with stoke. “Everything is going well, all the same, I still have to keep pushing myself to be better. “

The aim for Stoke City is to return to the premier league but the former Warri Wolves star said that is a tall order with the team being currently ranked 14th on the log.

“Gaining promotion is not going to be easy because we all know that the Championship league is one of the most difficult leagues in the world, I always say anyone who plays and survives in the championship can survive anywhere because the pace of the game is so intense.

“Aside from me they got some very good players like McLean, Tom Ince, Benik Afobe and so on. Stoke City is like a premier league club. Gaining promotion back to the top flight is not going to be easy but let’s wait until the end of the season. “

Etebo also played in the La Liga for Las Pamas on loan from Portuguese side Feirense and said playing in Spain was quite an experience.

Etebo was instrumental in the Super Eagles’ back to back Africa Cup of Nations qualifying wins over the Mediterranean Knights of Libya.