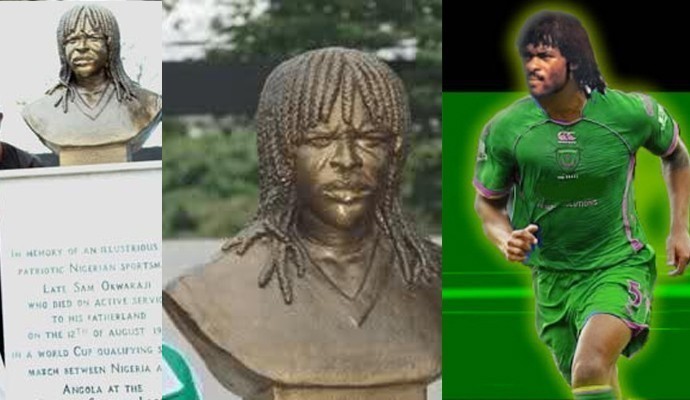 The fans who spoke to the News Agency of Nigeria in Abakaliki said the memory of Okwaraji who slumped during the encounter, would remain evergreen in their minds due to the rare qualities he displayed during his lifetime.

A soccer historian, Julius Ijeaku, recalled that he was inside the packed stadium on that day as several football fans died on the terraces out of possible suffocation.

“No one took notice of Okwaraji’s slumping until Samson Siasia saw him gasping and foaming at the mouth and subsequently raised alarm.

“The medics at the stadium tried resuscitating him before taking him to the hospital and before the end of the match, news has started flying that he had died,” he said.

Ikechukwu Itumo, Team Manager of Ebonyi United FC of Abakaliki, said that Okwaraji still holds the record of Nigeria’s most patriotic player even in death.

“He was not only reputed for offsetting his airfares to Super Eagles matches and declined to collect allowances, but he also related with his teammates with utmost humility in spite of being a doctorate degree holder in Law.

“His life continues being a shining example to the present-day footballers as the Super Eagles fortunes could have been better if the players emulated his sense of patriotism,” he said.

John Ibegwam, a film producer, said that in spite of Okwaraji’s sense of patriotism, he was an ingenious midfielder and a great source of motivation to youths.

“He was a classical midfielder whose sublime goal against Cameroon in the group stages of AFCON 1988 ranks among the best scored in the competition’s history.

“He also motivated several youths, especially footballers that football could be combined with academics and this impacted positively on several lives,” he said.

Mrs Bridget Obi, a trader and soccer follower who hails from Okwaraji’s hometown, Umudioka in Orlu, Imo State, urged the Federal Government to fulfil all promises made to the deceased’s family during his burial.

“It will be gratifying if such promises are fulfilled to serve as eternal gratitude from Nigeria for Okwaraji’s selfless service during his lifetime,” she said.