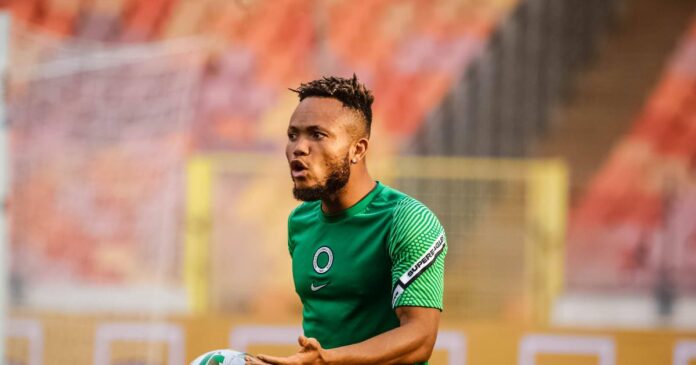 Super Eagles interim manager Augustine Eguavoen has answered another question on another player who he left out of the squad to face Ghana, Chidera Ejuke.

The CSKA Moscow man has failed to translate his good performances for his club to the Super Eagles. He failed to make any serious impact in Nigeria's AFCON run despite the hopes placed on him.

As a result, Eguavoen dropped him from the squad who will tackle Ghana's Black Stars over two legs for a spot in the 2022 FIFA World Cup in Qatar.

Eguavoen spoke extensively with Elegbete TV about the squad, his plans and how the team is preparing for Ghana in an interview recently.

On why he omitted Ejuke from his squad list, he said: “I’ve spoken to most of them one after the other. The best position and then another alternative position,” Eguavoen said.

”Now as at today, on the left side which Ejuke said is his best position… I’ve seen Ejuke. I still hold him close to my heart. Now we’ve given an opportunity to Ademola Lookman and then we have Moses Simon.

“On the right side, Dennis has come back and then Chukwueze. If you look at it, we are strong here and as well strong there. And then up there, we have Osimhen, Sadiq who’s doing well in Spain right now and the experience of Odion Ighalo. I also spoke with Olayinka as well, I know they have qualities.

“Ighalo last played for me in the U-23 but I’ve watched him play up to where he is now and it will be nice to see him closely again. It’s not like the door is shut for everyone out there. The door is still open for everyone.

“This is only a game and what we did is to have two players in each position and then three goalkeepers and others are on standby. Then we have a balanced team.”

Nigeria will travel to Kumasi, Ghana to take on the Black Stars in the first leg of their doubleheader fixture on 25 March, and will welcome their opponents to the Moshood Abiola Stadium, Abuja, four days later.

The Super Eagles face Ghana in a week's time and the injury to one of their most important players has thrown the camp into confusion.

Ndidi hobbled off in the 60th minute of the tie and Foxes coach, Brendan Rodgers revealed that the midfielder may have damaged his ligament.

“Ndidi has a blocked tackle, so it is his medial ligament and his knee, so we will see how that is,” Rodgers told BT Sport after the game.

Per football injury records, a medial ligament damage takes an average of six weeks to heal. However, the extent of the injury is yet to be known which means that Ndidi could be back in a week

The Super Eagles have Oghenekaro Etebo and Frank Onyeka as options to replace Ndidi in the squad, with Ogenyi Onazi on standby to be drafted in if Ndidi's injury turns out to be as serious as it