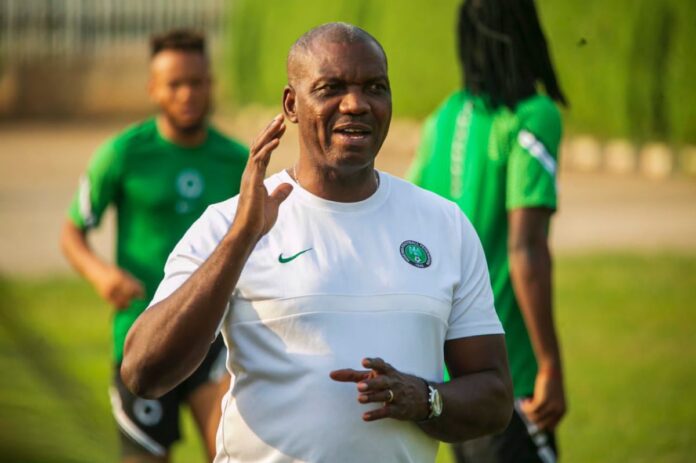 The interim manager of the Super Eagles of Nigeria, Augustine Eguavoen, in an interview with local sports media Elegbete TV, claimed that he and his team have already decided on the starting XI for the first leg of their 2022 FIFA World Cup playoffs against Ghana.

Nigeria and Ghana will rekindle their football rivalry after a long hiatus which saw Ghana lose some relevance on the African scene when they face each other in a few weeks for a spot at the Qatar World Cup.

The first leg takes place in Accra, Ghana and the second leg in Abuja, Nigeria. And Eguavoen has already decided on the starting XI he will field in the first leg of the tie.

“We have the 11 that will start,” Eguavoen told Elegbete TV. “We don’t need distractions, all we need is support to cross this hurdle.”

The interim boss defended his inclusion of Etebo, who was only out of the squad due to a long-term injury.

“Etebo I have worked with closely, Bonke I haven’t and I have had no chance to go to France to watch him play,” the interim manager explained.

“Etebo coming in now does not say he would be in the starting line-up.”

The former Super Eagles captain also said that he is still looking out for quality additions to his side, despite already deciding on the squad to face Ghana.

This is consistent with his role as technical advisor of the Nigerian Football Federation and a good omen for Nigerian fans who want to see their team keep improving.

Eguavoen has been spotted at several venues across Europe to check out possible candidates for the Super Eagles, most notably Crystal Palace players Eberechi Eze and Michael Olise.

He has also been to several NPFL venues to see the home grown talent he could work with.

However, the boss said that it has not been a successful search.

“That's why I went around the NPFL and abroad but the system that I like to play is to look for two offensive midfielders who can run box-to-box,” he said.

“We used to have late Oliha and Mutiu Adepoju. If I can find those two players as we speak today our formation will change.

“You plan your team around what you have, your strengths, that's how you prosecute the games.

“If I can find a player in the same caliber as late Oliha and Mutiu Adepoju our system will definitely change a little bit, but  however what we have right now we'll see how we can modify and try to see how we can prosecute these games”.