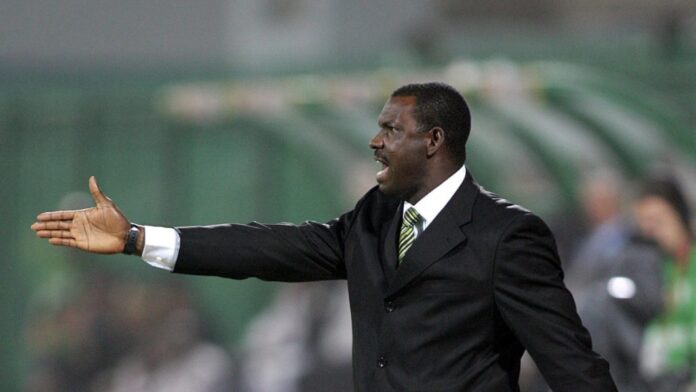 The interim coach will lead the team to Cameroon amid plenty of expectations.

Every day brings us closer to the Africa Cup of Nations (AFCON). With the tournament approaching its start, teams are putting in place final strategies to win it.

For the Super Eagles, camp opens on the 29th, with players expected to hit Abuja in preparation for AFCON. The England based players will start arriving from January 3. For Augustine Eguavoen, it is crunch time, and whether the Nigeria Football Federation (NFF) has set a target for him or not, the expectations of Nigerians are enormous.

Augustine Eguavoen last managed the Super Eagles to the AFCON in 2006. He led the team to a bronze medal finish. Despite the feat, Nigerians were dissatisfied. Eguavoen, who took over from Gernot Rohr earlier this month, is hard-pressed to satisfy Nigerians.

The Super Eagles interim coach has confessed that he does not sleep well because of the Super Eagles. Eguavoen said he is trying to fashion out a formula that would make Nigerians happy when the 2021 Africa Cup of Nations kicks off.

With AFCON kicking off in less than two weeks, Eguavoen told NFF TV that despite his contributions to the Super Eagles in the past, there are people who don’t trust in his ability to marshal the team to conquer in Cameroon.

Eguavoen confessed that the expectations are high, and managing the Super Eagles is no walk in the park. He promised Nigerians that he and his crew would do everything within their power to make Nigeria proud in Cameroon. Eguavoen was particular about the two sets of people behind the scenes – those who want the team to succeed and the naysayers, who are still in doubt.

Thoughts on the team and their chances

With a list of 40 players sent to the Confederation of African Football (CAF), Eguavoen had an arduous task on his hands to prune the team to 28 players. Speaking about the players, the former Super Eagles defender said the players were ready to fight for the shirt and to bring honour to Nigeria. Eguavoen was, however, concerned about the lack of friendly matches. He believes it would allow him to assess the players before the tournament.

Despite the lack of friendlies, Eguavoen expects the players to be professional with their job and do the bidding of the technical crew. For him, the time is short, and opportunities for a proper assessment are nonexistent, but Eguavoen has promised to make the best of a poor situation.

On his appointment as the interim coach of the senior national side, Eguavoen expressed shock and surprise. According to him, he didn’t expect the job, but he could not reject the offer. Eguavoen does not expect the team to struggle as they possess quality players. He believes the difference in leadership style and philosophy between him and Rohr would not matter and that the team would deliver in Cameroon.

The Super Eagles will close their camp on January 5 before departing for Cameroon. Nigeria play Egypt on January 11 in Garoua.