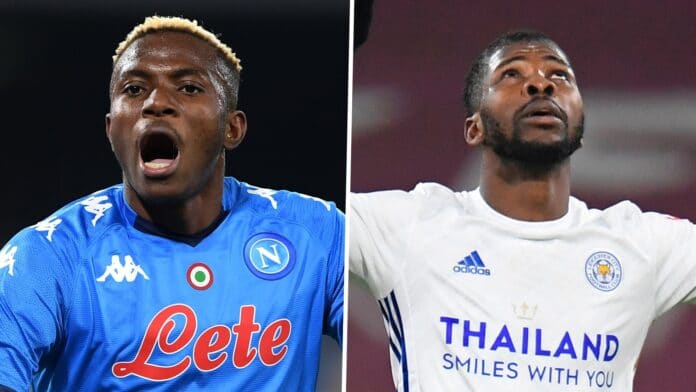 Nigerian strikers have been on top form in their various clubs over the past weeknd and on Monday and interim manager Augustine Eguavoen is sure to have a headache over the selection.

The African Cup of Nations winning right back took 10 attackers to the just concluded 33rd edition of the continental showpiece, and they delivered the goods in the group stages, with Nigeria being the second highest goalscorers behind host nation Cameroon.

A poor game in front of goal, however, mant that they could not continue their title charge in the tournament but the efficacy of the Super Eagles’ strikers was displayed to the rest of the continent and to the world who was watching.

Back at their various clubs after the tournament ended, the Super Eagles’ frontmen have continued their blistering form ahead of a major clash against the Black Stars of Ghana for a spot in the 2022 FIFA World Cup in Qatar later this year.

The weekend saw Emmanuel Dennis – who missed out on the tournament due to issues with his club but is in discussions for a reintegration back into the Super Eagles squad – score the lone goal that gave Watford their fifth win of the Premier League season over Aston Villa.

CD Mirandes, 18th in the Spanish Segunda Division, were dealt a huge blow in their fight to avoid relegation by Sadiq Umar who sparked a comeback for his club, UD Almeria.

Mirandes manager Joseba Etxeberria expressed disappointment at his team’s inability to hold back the big striker who scored twice in four minutes to secure all three points for Almeria as they continue their march back to LaLiga.

Etxeberria claimed that the match was balanced until “ difference maker”  Umar changed the game and tipped it in Almeria’s favour.

“And the pity was that, right away, he made it 2-0 [against] us. I think we have defended quite well against a team with many offensive arguments.”

Sadiq’s brace takes his tally for the season to 12 goals, continuing his great start to 2022 where he also made his international debut for the Super Eagles and scored his first international goal as well.

Over in Italy, Victor Osimhen rose highest to help Napoli secure a point on the road in the Serie A.

Luciano Spaletti named a weakened side to face Serie A strugglers Cagliari, most likely in anticipation of their return Europa League match against Barcelona on Thursday.

However, his decision almost backfired as the strugglers went ahead in the 58th minute.

Spaletti threw on Osimhen later in the game who continued to terrorise the opposition defenders with his peed, agility and power. He eventually got the breakthrough for the Partenopeans after rising highest to head home from a Mario Rui cross.

Osimhen’ s goal no means Napoli are third in the table, two points away from the Serie A league leaders AC Milan.

Over in Saudi Arabia, veteran Super Eagles striker Odion Ighalo has continued his fine start to life in Saudi Arabia and in his new club Al Hilal after sparking a comeback victory to help the club progress to the King’ s Cup semi final.

It looked like Al Hilal were going to be dumped out of the tournament until new signing Ighalo leveled the tie in the 62nd minute when he displayed killer striker instincts to put the ball past the Al Nassr goalkeeper.

Only a few days ago, Ighalo scored a brace against Al Shabab to guide Al Hilal to a 5-0 win over his former employers. His goal in the 6-1 demolition of Al Jazira at the Club World Cup rounds up the lot, making it four goals in four appearances since signing for Al Hilal.

Eguavoen will have a big headache as he decides which strikers to take to the battlefront against Ghana come March.