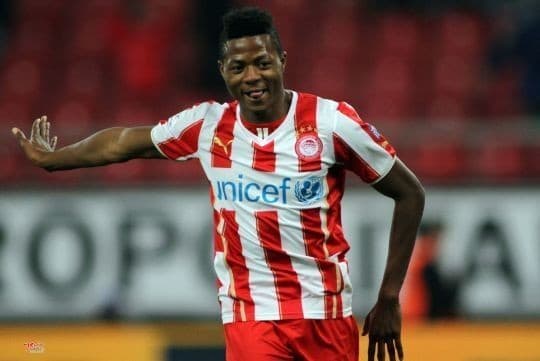 Former Nigeria U20 international Michael Olaitan has been sued by the architect managing the erection of his estates for not meeting his contractual obligations.

According to Allnigeriasoccer.com, the architect built a new N400 million estate for Olaitan and there was disagreement regarding a N25 million commission Olaitan's representatives were supposed to remit to the architect.

Sources close to the player's family revealed that the architect dragged the player to an Area Court in Bukuru earlier this year and the case was adjourned for 9am today but later shifted to 11am.

Michael Olaitan, who is one of Nigeria's finest footballers, had health challenges that has depleted his career in recent times.

The gifted midfielder and attacker was on the verge of being named in Coach Stephen Keshi's provisional Super Eagles squad ahead of the 2014 World Cup finals in Brazil.

He was playing for Olympiakos when the player suddenly suffered a heart problem in a competitive game between Olympiakos and rivals Panathinaikos which ruled him out of the World Cup.

Olaitan was also one of Nigeria's most outstanding performers at the 2013 FIFA Under-20 World Cup finals in Turkey, where he featured along with the likes of Wilfred Ndidi, Kayode Olarenwaju and several others in a tournament won by France.

The player's career has been on the decline but reports say that his agents are working towards reviving the once rising prospect.