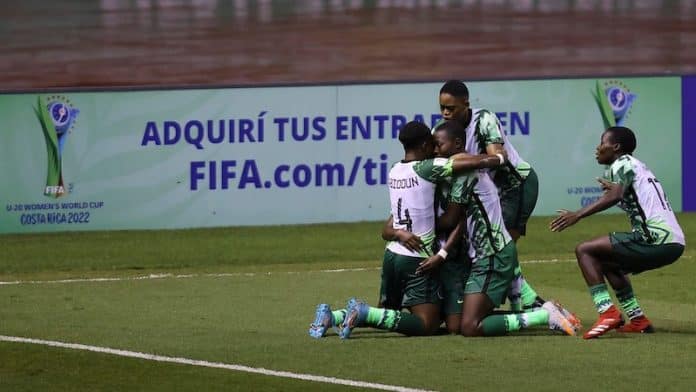 Nigeria’s U20 coach Chris Danjuma has taken time to explain his team’s approach to games at the ongoing World Cup in Costa Rica.

Nigeria beat South Korea 1-0 on Sunday in their second Group C game to go top of the group. It was Esther Onyenezide’s late strike that handed the Falconets the win over the Asians.

The experienced gaffer, who was speaking in his post-match interview with NFF TV, explained the reasons why the team decided to stick with the approach that got them the win over France against the Asian side.

“Football is about building your own tactics as it suits you. Playing against a Korean team, if they find space, they run and there are certain areas of the pitch they use to make incursion into your box so all we need to do is get persons to take the responsibility of making sure they don’t come through that area,”

On why the team employs a deep defensive structure, Danjuma said;

“You know it’s easy to say ‘why don’t they go forward?’ Holistically, you might say the whole team can go forward but I spot a weak link and I want to make sure we don’t go forward, lose the ball and it becomes a counter against us and when we lose, so better we play deep… I mean, it wasn’t a deep thing per se, maybe always see them playing deep, it was to get the ball in those areas, see how the goal comes and attack the Koreans. It’s a trap we’re setting. Get the ball, we come, consider the last one Chiamaka got a foul, it’s a trap.”

Having defeated European champions France in their opening game, Danjuma and his girls knew that a win against the South Koreans will all but confirm their place in the second round of the competition, which they duly got.

The Falconets soaked a lot of pressure before punishing the enterprising Asians in the late embers of the game through Esther Onyenezide’s fabulous strike.

For large spells against South Korea, Nigeria dominated play but the Asians created the better chances in the game.

Goalkeeper Omini Oyono made a string of excellent saves to keep the scoreline at 0-0 until Esther Onyenezide came up with the winner in the 81st minute.

The defensive pairing of Oluwatosin Demehin and Omowunmi Oshobukola were solid in their centre half positions, while Jumoke Alani and Rofiat Imuran added the required balance in the full-back positions.

The Falconets will face Canada in their final group match on Wednesday.