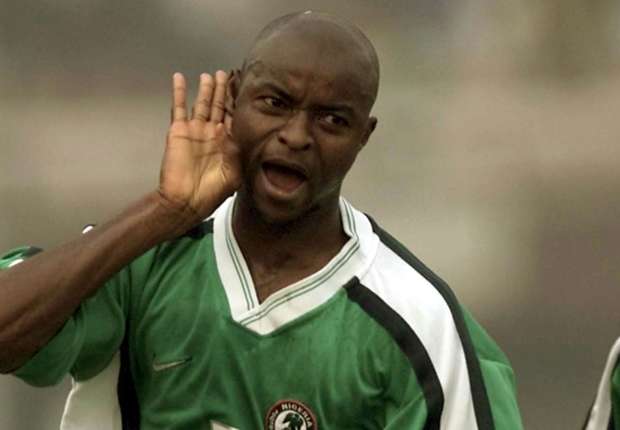 Former Super Eagles winger and newly-appointed assistant manager Finidi George has revealed his one regret from his time as a Super Eagles' player.

The famous number 7, renowned for his speed, technicality and finishing, made 62 appearances for the Super Eagles from 1991 to 2002.

His career as a professional spanned 15 years and in only two years after his professional debut, he was co-opted into the Super Eagles setup. He went on to become a key part of many squads for the various tournaments which the country participated in during that era.

However, he was not a part of the famous Atlanta 1996 Olympics squad which famously beat Brazil in the final of the men's football games.

Olympics football rules allow for participating countries to include three overage players in a squad of under-23 players, and Dutch coach Jo Bonfrere selected Finidi's national teammates Uche Okechukwu, Emmanuel Amuneke, and Daniel Amokachi as part of his 22-man squad for the tournament.

Two years prior, in 1994, Finidi, the Atlanta overage trio and others lifted the African Cup of Nations in Tunisia and also participated in Nigeria's first ever World Cup also held in USA.

Speaking in an interview after his appointment as the Super Eagles assistant coach, Finidi, who will be leaving his role as head coach of Enyimba FC in the coming weeks to pick up duties in the national team dugout, spoke of his disappointment in missing out on that iconic squad.

“It was unfortunate that I was not part of the overaged players taken to the tournament,” Finidi told Goal.

“I would have loved to be a part of that team, but it was impossible for me to force myself in.

“The coaches picked the players they felt were going to help the team, and I was disappointed not making the cut.

“Nonetheless, we were all happy for the victory, but I would have loved to be a part.”

Finidi, however, is one of Nigeria's most decorated players. In his 15-year career, he won three Eredivisie titles, the UEFA Champions League, the UEFA Super Cup and the Intercontinental Cup with Ajax Amsterdam.

On the national team front, he won one AFCON title, one AFCON silver medal and two AFCON bronze medals.

Elsewhere, Jay-Jay Okocha has charged the Confederation of African Football (CAF) to take a leaf out of the modus operandi manual of football used in the Gulf nations.

Okocha, who was one of the eight FIFA legends to conduct the 2022 World Cup draws in Doha, Qatar on April 1, spoke on how Africa can, like the middle east, use football to leave the trenches the continent is currently in.

“Like Gulf countries such as Qatar, Bahrain, and the United Arab Emirates, Africa can and must use football as a showcase for its development,” Okocha said.

“The benefits are immense and in the space of a few years, an incredible amount of opportunity can emerge for our millions of young people.

“Africa needs to completely rethink its approach to football. We should no longer see football as a party.

“Certainly, it is a game that provides pleasure, but this game must be used to create wealth and employment.”