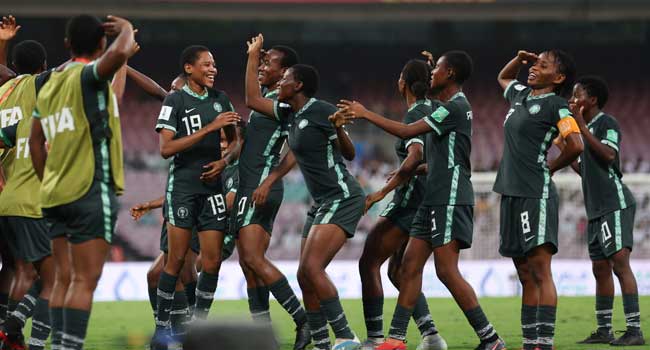 Nigeria’s U-17 women’s national team, the Flamingos, claimed their first-ever bronze medal at the U-17 Women’s World Cup in India on Sunday, after defeating Germany 3-2 on penalties.

This is the first time the country will finish on the podium at this level of football, having only managed a quarter-final appearance since the competition began in 2008.

The Flamingos had lost on penalties to Colombia in the semis, while the Germans were beaten by eventual champions Spain in the other semis final clash to set up the third-place clash between the two teams who had earlier met in the competition.

The Nigerians went 3-0 up but the Germans, who had beaten the Flamingos 2-1 in the opening group stage match, staged a dramatic comeback late on to tie the loser’s final 3-3.

The Germans scored first in the 5th minute but the goal was ruled out after a VAR review, following a foul on Flamingos goalkeeper Faith Omilana.

Opeyemi Ajakaye ended her goal drought with a brilliant opener in the 20th minute to put Nigeria ahead, before Amina Bello doubled the lead with a brilliant header just three minutes into the second half.

Super sub Edidiong Etim, who came on for Chidera Okenwa in the 59th minute, made it 3-0 for Nigeria after just four minutes on the pitch.

Just when Nigeria thought they had the game wrapped up, the Germans pulled one back through Jella Viet in the 73rd minute. They got their second in the 88th minute through Platiner Paulina and Loreen Bender equalized for the European champions in the 92nd minute to drag the match into penalties.

Blessing Sunday, Etim and Player-of-The-Match Ajakaye all scored from the spot for Flamingos but defender Tumininu Adeshina’s miss didn’t matter as Pauliner Bartz missed the crucial kick for Germany.

“I am a very happy man; we did not leave India empty-handed. It has been a great tournament with a lot of lessons learnt. We give God the glory.”

The victorious Flamingos will fly back into Nigeria on Tuesday.