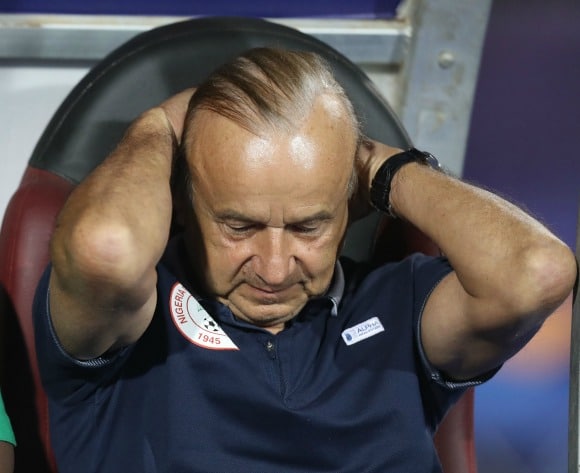 The Nigeria Football Federation has debunked the widespread news of the sack of Super Eagles manager Gernot Rohr.

Social media was agog on Thursday, with the rumour of the purported disengagement of the German.

Rumours were rife regarding the sack of Gernot Rohr, but the Nigeria Football Federation have denied that they have sacked the coach of the men’s senior national team.

Following the poor performances of the Super Eagles in the CAF FIFA World Cup qualifying series, there has been a clamour for the sack of the national team’s coach. Despite qualifying for the playoffs, Nigerians have made their dissatisfaction at Super Eagles performances known.

With his capacity over the years questioned, the German did himself no favours with the invitation of Al Shabab striker Odion Ighalo. The invitation of the striker, who had earlier declared his international retirement irked many. It is an indication of the failure to harness the rich talent that abounds in the team.

On Thursday afternoon, social media was agog with rumours of the sack of Gernot Rohr. The news excited many who believe Rohr is not fit to lead the team to glory. The fear is that the team would be humiliated in the playoffs and embarrassed at the African Cup of Nations.

Following reports of the sack of Gernot Rohr on social media on Thursday, the Nigeria Football Federation have made clarifications on the fate of the German. The football governing body have also denied sacking the Super Eagles coach.

The news of Rohr’s purported sack was circulated widely by local and international media, with most of them claiming to have his sack on good authority. However, it turned out to be a false alarm.

NFF debunks the news, claiming that there is no truth in it. They maintain the 68-year-old remains the manager of the Super Eagles.

According to Mr Amaju Melvin Pinnick, the president of the NFF, the NFF Board is studying the Technical Committee report. The communique submitted after the draw against Cape Verde at the Teslim Balogun Stadium on Tuesday will form the basis of the manager’s continued stay in the Super Eagles. Pinnick believes that whatever decision it takes will please Nigerians.

He also reiterated that Gernot Rohr has a contract with the NFF, and due process will trail the event of disengagement.

The Super Eagles made an otherwise simple group look like a group of death. Liberia, Cape Verde and the Central African Republic were supposed to be uncomplicated matches for the three-time continental champions, but it was a labour to qualify for the playoffs.

The draw against Cape Verde at the Teslim Balogun Stadium and the loss to the Central African Republic at the same venue have irked many fans. The faith reposed by a section of the fans in the manager seems eroded. It is evident in the clamour for his sack which reached a crescendo.

In his five-year tenure, Rohr led the team in 54 matches, winning 28 of them.