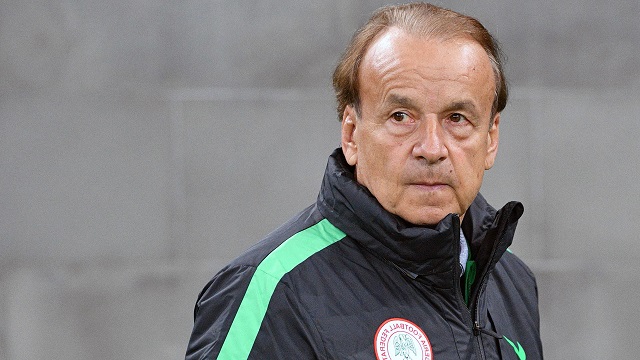 Super Eagles head coach, Gernot Rohr, is under scrutiny and may not be the man to lead the team to Qatar 2022 if they qualify, according to sources.

Gernot Rohr took over as Super Eagles head coach in August 2016, after a turbulent managerial career in which he had been sacked multiple times by both clubs and national teams. However, he has managed to find some sort of redemption at the helm of the Super Eagles team, managing to raise a balanced squad of talented youngsters and experienced veterans.

Gone are the days when Nigerians had to hope for a team’s loss or win for the Super Eagles to qualify for a major tournament or scale a hurdle in said tournament. He qualified Nigeria as the first African nation to book a slot at the 2018 FIFA World Cup in Russia, and also finished in third place at the 2019 African Cup of Nations in Egypt which earned him a contract extension in May 2020.

Under Gernot Rohr, debuts have been handed to several excellent diasporan players of Nigerian descent as well as promising homegrown talent. Videos coming out of the Super Eagles’ training camps always show a great sign of camaraderie, which gives hope that the team is united enough to fight for their objectives on the pitch.

This positive pales in comparison to the negative which has seen the Super Eagles lose the fear factor they once had in African football. The Super Eagles ended the Second Round of CAF 2022 World Cup qualifying with four wins, a draw and a loss, securing 13 points and a top of the table spot to earn a place in the Third Round playoffs. However, the nervy performance of the team in the second round has been heavily criticised by the local media and fans.

There seems to be no love for the German’s methods. Speaking to Brila FM Abuja in October 2021, Nosa Igiebor, AFCON 2013 winner with Stephen Keshi’s Super Eagles team claimed that former Super Eagles captain, John Mikel Obi, who retired from the national team in Rohr’s tenure as manager, even questioned his tactics during the 2018 FIFA World Cup and the 2019 African Cup of Nations in Egypt.

Patience running thin among key figures in the NFF

After the 1-all draw against Cape Verde at the Teslim Balogun Stadium in Lagos to end the Second Round of qualifying, news has now come out from the Nigerian Football Federation about terminating the 68-year-old German’s contract with the National team.

According to NFF media affiliate, Adepoju Tobi Samuel on Twitter, “the body language to sack Gernot Rohr is very strong this time.”

Rohr, however, still has the backing of his players and a few top NFF officials who believe that Rohr hasn’t failed in his mission just yet.

Speaking to BBC Sport Africa, Napoli striker Victor Osimhen, scorer of four of the nine goals that helped the Super Eagles finish top of the group, echoed this sentiment. “What's important is getting to the next stage of the qualifying, that's what the target was and I'm proud we could achieve that.”