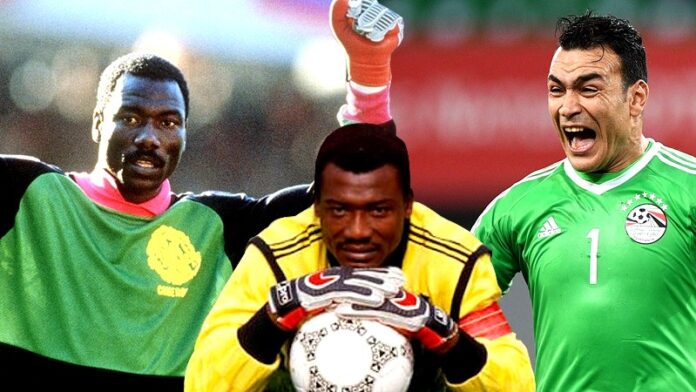 Africa has produced a top goal-keeping personality as regards the football played within the English topflight circles.

And with the records intact as far as the Premier League is concerned, there are safe hands who’ve represented the African continent based on their goalkeeping exploits in the English (football) scene.

We've seen a couple of top goalkeepers emanate from the Black continent of Africa while Arsenal is said to be linked with Ajax Cameroon goalkeeper Andre Onana.

With these amazing exploits on account of African goalkeepers in the EPL, Goalballlive.com evaluates top-ranked African safe hands in the Premier League history.

The fair-skinned goalie made the grades at Molineux Stadium despite going on loan to eight different teams.

He’s made his name with Wolverhampton Wanderers from where he got the call-up to the Nigerian National team.

Deputizing for a goalie like that of Vincent Enyeama, he was supposed to produced genies class in goal.

That was his display when he made his debut in the green and white shirt for Nigeria’s Super Eagles.

The Ghanaian shot-stopper had a four-year stay in the English football playing for sides like Birmingham City, Wigan Athletic and notably Blackpool.

He is a renowned campaigner in his native country Ghana.

He recorded about 90 caps for the Africa giants even as featuring at the 2006 and 2010 World Cup was the highest point of his game as a professional.

While finishing as runners-up against Egypt at the 2010 Nations Cup was another major memory he had playing for the Ghanaian National sides.

The Senegalese goaltender has been relatively impressive since his move to the Premier League and to the West London club (Chelsea) to be precise.

Keeping out Kepa Arrizabalaga world be a notable dealing which he’s done at the top EPL side.

While he’s won the UEFA Champions League and UEFA Super Cup as well as his manager's confidence Thomas Tuchel.

He’s now a pacesetter for African goalkeeper as his destined for great (big) things with the way he and his side Chelsea have started the season.

Andre was a renowned player in the South African side that claims the country’s only Nations Cup gold to date.

He was in the starting team that defeated North African side Tunisia in the final play in Johannesburg.

His career started in his homeland but with greener pastures beckoning he moved to the Premier League where he had a stint with Fulham and Oxford United.

Returning home to South Africa, he won the PSL with SuperSport United in 2009. Even as he’s now moved into coaching modest PSL side, Bidvest United.

Bruce is arguably Africa's greatest goalkeeper to have graced the continents.

The Zimbabwe goaltender is a legend for Liverpool while he won the European Championship with the Reds.

The Anfield side owes a huge stake of their success story at that level to Grobbelaar and his bandy legs secured the win over AS Roma from the penalty shoot-out following their continental title win for the club.

Though Bruce was getting older when the Premier League began, he managed to turn out for his Reds side for several years before evenly moved on to join modest EPL side Southampton.