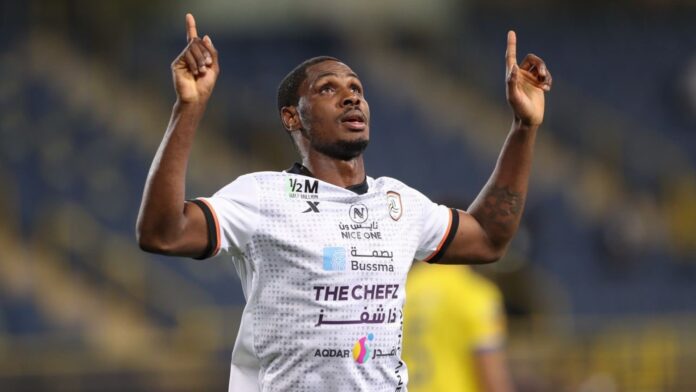 The Africa Cup of Nations is around the corner, and the Super Eagles of Nigeria are in the final stage of preparations. Though the camp is bubbling and full of life, the team can’t boast of a full complement of all the invited players.

As of Wednesday morning, there were 24 players in camp, with Jo Aribo the latest arrival to camp. The players in the four invited goalkeepers, John Noble (Enyimba), Francis Uzoho (AC Omonia), Daniel Akpeyi (Kaizer Chiefs) and Maduka Okoye (Sparta Rotterdam.

The inclusion of Odion Ighalo in the team raised eyebrows, as many believe that the player is past it. However, there has been a twist to the tale as it seems the former Watford striker would not be available to Augustine Eguavoen in Cameroon.

Saudi Arabian club Al-Shabab have refused to release the Nigerian striker putting Eguavoen in a quandary on what to do. By Wednesday morning, the 32-year-old striker was yet to arrive at the Super Eagles Bolton White Hotel and Apartments camp.

Many believe the former Granada striker will not be in Cameroon for AFCON, with feelers suggesting the AL-Shabab have no interest in releasing the forward.

Eguavoen works on a contingency plan

The Super Eagles interim manager Augustine Eguavoen is already looking beyond Odion Ighalo. Al-Shabab have not cooperated with the Super Eagles with regards to the availability of the player, and the striker is about to be replaced by Feyenoord star Cyriel Dessers.

Many mouths were left agape with the omission of Dessers from the 28-man list. The forward has had a decent season with Feyenoord, with eight goals and one assist from 20 appearances in the 2021/22 season.

The 27-year-old Belgian born forward has made a solitary appearance for the Super Eagles, and it came over a year ago. Dessers is on the verge of another opportunity as Ighalo may miss the tournament.

It will not be a straightforward task for Dessers, with competition in the team very high. Should Dessers get an invitation, he would have to compete with Taiwo Awoniyi, Sadiq Umar and Henry Onyekuru for a starting berth.

Nigeria kicks off its AFCON campaign, with a date against Egypt on January 11 in Garoua.