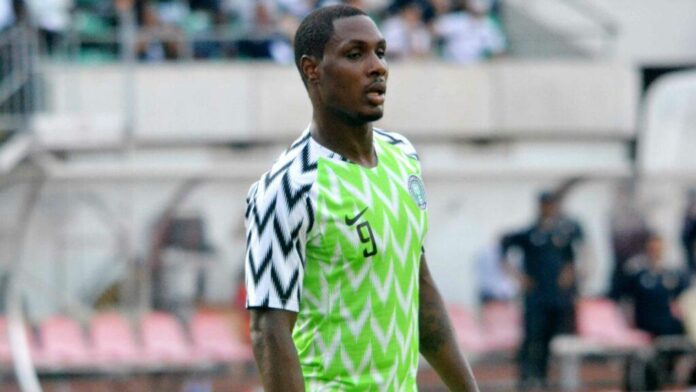 However, Ighalo has refuted the accusations. He claims to have bowed to pressure from the NFF.

The furore over the performance of the Super Eagles is yet to settle as fans continue to examine the Super Eagles clinically. The week was agog with the rumour of the sack of the national team manager Gernot Rohr. It came as a delight to many fans, who see the German tactician as not the right fit for the team. The NFF has, to the dismay of these fans, poured cold water on the rumours.

Another sticking point for several irked fans is the personnel that prosecuted the qualifiers. The belief is that money was a critical factor in determining the players who eventually make it to the Super Eagles.

Blessed with quality talent scattered across the globe, the Super Eagles should not be a place to resurrect flagging careers. The belief is that money exchanged hands to facilitate his return to the Super Eagles.

Of bribery and an unpopular invitation

Former Watford and Manchester United player Odion Ighalo is in the eye of the storm, with accusations levelled at him of having bribed his way back to the Super Eagles. The curious invitation and shoddy performance against Cape Verde have left many tongues wagging.

After the 2019 Africa Cup of Nations, Ighalo, who now plays for Al-Shabab, brought his international career to an end.

According to reports, Nigeria Football Federation president Amaju Pinnick and the Super Eagles manager Gernot Rohr pressurised the striker to return to the national team.

🗣 ❝In my opinion, there was no need to bring Ighalo back. Presently the Super Eagles are not playing well and recalling Ighalo is not going to solve that problem. ❞ @tayo_taiwo #WCQ2022 pic.twitter.com/b7VBmoJu4U

The NFF and Ighalo also faced the challenge of convincing Al-Shabab to release Ighalo for the qualifiers because Ighalo had impressed the Saudi Arabian club upon his arrival in February 2021 that his Super Eagles career was over.

As bribery claims trail the invitation of Odion Ighalo to the Super Eagles, the striker has attempted to clear his name of stain. Ighalo was irked by the unverified claims he paid his way to the Super Eagles. The forward insisted he had never offered money to feature for any team and was not about to start now.

Ighalo claims to have been in communication with the NFF about a return to the Super Eagles. He claims his return is not one that he willingly agreed to. The striker who has served the nation faithfully said that he resisted the temptation, but the pressure on him was beyond what he could bear.

Ighalo continues that upon signing for the Saudi Arabian team that he told them he had retired from international football, and getting his release from Al-Shabab was a tough assignment. Regardless, he was happy to have the opportunity to support the team.

Ighalo was also unhappy with the claims he paid to return to the Super Eagles and pointed fingers at an unidentified figure in the UK. He said he has refrained from taking it up legally with the person.