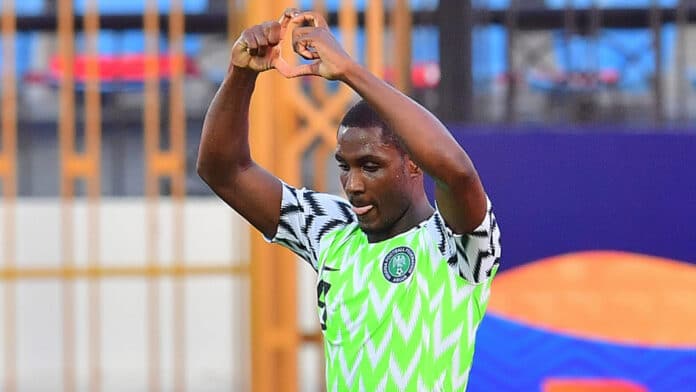 Amaju Pinnick has confirmed that Odion Ighalo will be available for the doubleheader against Ghana next month.

Ighalo did not play for Nigeria at AFCON after his former club Al-Shabab denied him the chance.

It has been a busy period for the president of the Nigeria Football Federation (NFF), Amaju Pinnick. Pinnick has been globetrotting to put everything in place to ensure that the Super Eagles of Nigeria would be in Qatar later this year for the FIFA World Cup.

Pinnick is leaving no stone unturned to see the senior national team of Nigeria succeed. Pinnick must receive credit for getting Ademola Lookman to switch allegiance from England to Nigeria. He might have failed in getting players like Tammy Abraham and Fikayo Tomori to play for Nigeria, but it was not for lack of effort.

Pinnick this week reached out to Super Eagles striker Odion Ighalo to play for Nigeria, and the Al-Hilal striker agreed to the call.

Ighalo to return for Ghana clash

Nigeria were shorn of their strike force at the Africa Cup of Nations in Cameroon. The Super Eagles were at AFCON with just two recognised strikers, Taiwo Awoniyi and Sadiq Umar. The West African side were robbed of three strikers by injuries and the refusal of the club to release them.

Victor Osimhen was the victim of an injury that kept him on the sidelines for a bit, as Emmanuel Dennis and Odion Ighalo were refused participation by their clubs Watford and Al-Shabab.

The Super Eagles will return to action next month when they take on the Black Stars of Ghana. Al-Hilal forward Odion Ighalo has promised to be available for the games. According to the Nigeria Football Federation (NFF) president Amaju Pinnick, Odion Ighalo will return for the World Cup playoffs against Ghana.

Ighalo rescinded his international retirement decision and was included in the squad for AFCON in Cameroon, but his club Al-Shabab played hardball with his release. The former Manchester United striker has since joined Al-Hilal and is currently playing at the FIFA Club World Cup.

Amaju Pinnick has confirmed that former Manchester United striker Odion Ighalo will be back for the World Cup playoffs against Ghana next month. The NFF president confirmed this after visiting the striker in Qatar, where Ighalo is leading the attack for Al-Hilal at the FIFA Club World Cup.

Amaju Pinnick posted on his Twitter handle where he confirmed the availability of Odion Ighalo for the playoffs. According to Pinnick, qualification for the next World Cup is non-negotiable. The NFF president said the federation was doing everything possible to see the Super Eagles at the World Cup.

Ighalo came out of retirement to play for the Super Eagles. The former Granada striker played last for the Super Eagles against Cape Verde in a World Cup qualifier last year. The forward failed to score in the game that ended 1-1 but is determined to help Nigeria qualify for Qatar.

Pinnick also expressed his excitement at the availability of Ademola Lookman for selection. The Leicester forward hopes to be included in the two-legged affair against Ghana.