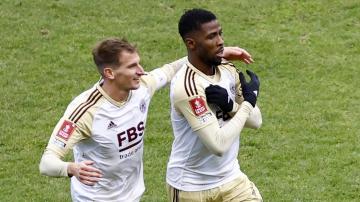 Super Eagles forward Kelechi Iheanacho’s second half goal was all Leicester City needed to beat Gillingham 1-0 and reach the fourth round of the FA cup on Saturday.

Leicester were patient in the contest and waited for Gillingham’s defensive hordes to buckle before nicking progressions.

Kelechi has barely started games this season under Brendan Rodgers, but he was fielded for this fixture in the third round of the cup competition.

Caglar Soyuncu was returned to the backline for Leicester, while Nampalys Mendy added grit in midfield; McAteer and captain Marc Albrighton offered wide options, but Youri Tielemans struggled to impose himself, while Jamie Vardy and Iheanacho were isolated upfront.

Gillingham defended deeply, but calmly. Max Ehmer and Will Wright were an imperious central defensive pairing, while goalkeeper Jake Turner was spared the busy lunchtime he might have anticipated.

Despite the lion share of ball possession, the Foxes struggled to create enough goal scoring chances as their hosts continued to defend in their numbers.

Tielemans’s wind-assisted cross fell to McAteer, whose pullback was deflected into Iheanacho’s path and the Nigerian with just one goal to his name all season showed no mercy from 10 yards.

Now Leicester looked more at ease with themselves and soon Turner was saving smartly from Iheanacho with his legs and Vardy with his palm.

Leicester city had everything under control following the opener and went in search of more goals but it never came.

Fellow countryman Wilfred Ndidi replaced Mendy with ten minutes to go to help the Foxes see out the win and subsequent progression into the next round of the tournament.