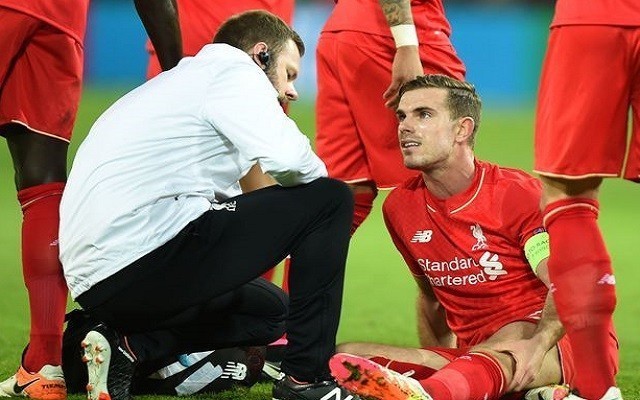 Jurgen Klopp has admitted Jordan Henderson's injury looks “Serious enough” after the former Sunderland midfielder was taken off in the early stages of their Champions League last-16 second leg victory over Bayern Munich.

Henderson was replaced by Fabinho in the 13th minute following a clash with Bayern's James Rodriguez.

The Liverpool midfielder appeared to roll his ankle and Klopp hinted he could be facing a spell on the sidelines.

“Hendo's twisted ankle, we have to see,” said the German.

“It looks serious enough, and when you have to change in the middle of the park it's not ideal.”

“We didn't want to ‘rest' Fabinho but we wanted to bring in fresh legs. Hendo had fresh legs but it didn't help his ankle!

“We had to change a little bit, and we wanted to play more football than we did in the first half. The second half that was much better.

“We scored wonderful goals, an outstanding first goal, wow, but we conceded one as well. I think after 45 minutes, everybody knew it would not be easy. It was possible, but not easy. That's how I saw it.”