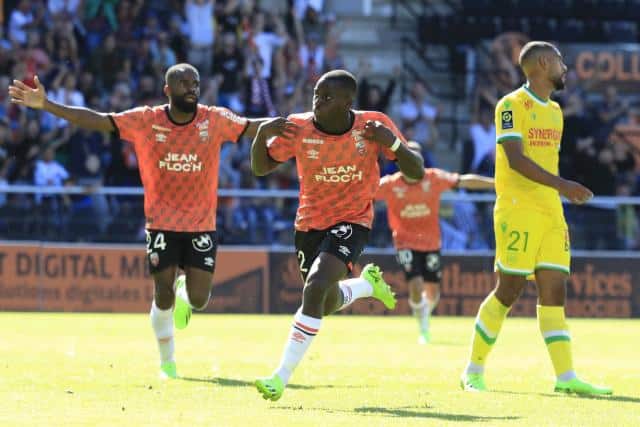 It was a clash of Nigerian brothers in Ligue 1 on Sunday as Lorient hosted Nantes at Stade du Moustoir.

After going 11 Ligue 1 games without beating Nantes, Lorient claimed their first win after a hard-fighting 3-2 victory to extend their incredible start to the campaign.

Terem Moffi and Innocent Bonke both started for Lorient, while Moses Simon was fielded by Nantes in attack.

In a game of huge significance, it was Nantes who started the brighter, and bore the fruit of their early pressure when Quentin Merlin’s corner was flicked home at the near post by Ignatius Ganago.

However, Nantes' lead only lasted six minutes though, as a moment of magic from Dango Ouattara brought the home side on level terms. He stepped forward from a free-kick to curl up and over the wall leaving Alban Lafont hapless in goal..

Ganago continued to trouble the hosts in the game as he thought he had given the away side the lead again, only for a brief VAR check ruled that the Cameroonian was offside before putting the ball away.

Moffi’s Lorient struggled to maintain any sort of momentum throughout the game, but took the lead on the hour mark, when a sublime curling effort from Yoann Cathline nestled into the top corner beyond a desperate Lafont dive.

Just when it looked like Nantes were coming back into the game, Nicolas Pallois sloppily gave the ball away 25-yards from his own goal and when Dango collected and slipped Ibrahima Koné through, the substitute made no mistake in placing the game beyond any reasonable doubt.

Although Moffi could not add to his tally thus far, but there was still time for Simon to score as he grabbed a late consolation for his side in the defeat..l

Nantes have found themselves in the bottom four, while Lorient’s continued their brilliant start to the season to sit in fourth spot.