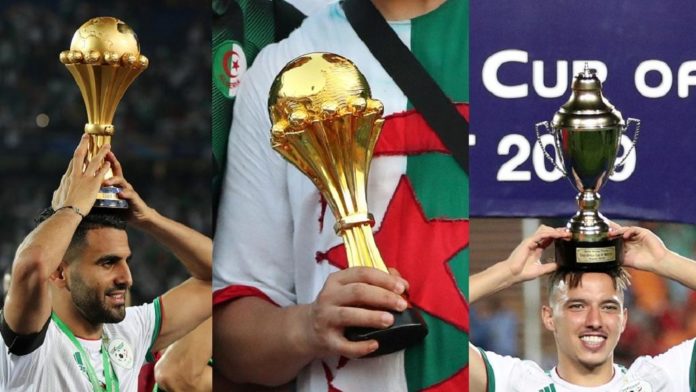 As a Nigerian writing this list of past AFCON winners article, I’m kind of ashamed that the ‘giant of Africa’ has won the Africa Cup of Nation only three times since its inception in 1957.

Who is to blame? The players? The Football Federation?

And sometimes it is the Government of the day.

The competition was first hosted at Khartoum, Sudan, where Egypt defeated the host country to become the first AFCON winner.

As if that wasn’t enough, Egypt went on to become the country that has won the competition more than any other African country, winning it for the seventh time when it was hosted by in 2010.

The Black Stars of Ghana lost to the Pharaohs of Egypt 0-1 in the final.

So when you are talking of the country that has won the Africa Cup of Nation the most, you have your answer.

Sadly since then, the Pharaohs have not won the tournament even with the likes of Mohamed Salah.

Hopefully, before the Liverpool star man ends his career, Egypt could change their fortune in the coming tournament.

How many African Cups has Ghana won?

Alright, back to my list of past African Nations Cup winners.

By the way, the all-time top scorers at the AFCON has been captured in this article. You can check it out.

The last AFCON competition was hosted by Egypt in 2019 and it was Algeria that lifted the title.

Manchester City attacker, Riyad Mahrez singlehandedly shattered the hope of Gernot Rohr’s men in the semi-final stage of the competition when he scored a free-kick in extra time changing the scoreline from 1-1 to 2-1.

Liverpool star player Sadio Mane just couldn’t do anything for his Senegalese side to stop Mahrez and Slimani of Sporting CP.

The game ended in a lone goal for Algeria to win their second AFCON trophy after a long while, winning it last in 1990.

It’s time I got to my AFCON past winners list.

Here is a breakdown of the table above:

Countries With The Most Africa Cup Of Nations Trophies

I don't think you'll find any list of past AFCON winners more complete and thorough.