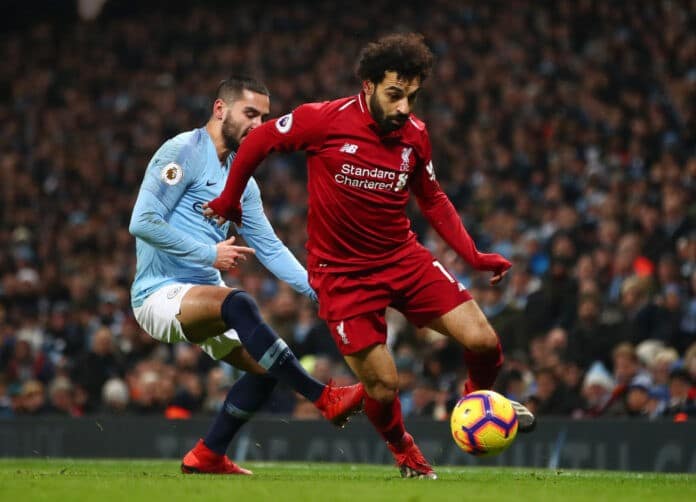 The Liverpool vs. Manchester City fixture is arguably the star match of the weekend in the Premier League as both top sides clash in the top-of-the-table contest on Sunday.

It promises to be a frenetic atmosphere this weekend as hostility ensues between both EPL rivals at Anfield.

For the last couple of years, the rivalry has risen into one of the best games in the modern game, as Pep Guardiola and Jurgen Klopp continually go head to head in games of this pedigree.

The Reds look certain for a title battle with Manchester City as Virgil Van Dijk is back fit and back to his usual best.

While the African pair of Sadio Mane and Mohamed Salah continue their fine form with more goals in the final third like they did find the back of the net in the midweek fixture against FC Porto.

Liverpool sits at the League Summit going into the matchday 7 duel here while the Citizens are second on the log as both teams will be keen to pick maximum point going into the International break.

However, a win for either side would send a standout message not minding that it's still early stages in the season.

As for the visitors, they proved how good they are as the current title holders last weekend beating Thomas Tuchel's more fancied side at home and thus reminding their doubters about their overall quality as a team.

With City's trio of Kevin De Bruyne, Rodri and Phil Foden back to fitness, the Champions are back to business.

But their only issue? Finishing their chances away in top games, as they couldn't do at French Capital PSG during midweek's UEFA Champions League match.

With all things been equal this term, the Reds and Manchester City should be right at the top of the table competing for the EPL title.

The major concern for Jurgen Klopp's side is Trent Alexander-Arnold, as the right-back seems likely to be unavailable due to his groin injury.

That should see James Milner slot in at right-back. Thiago Alcantara will be absent for a few more weeks, while Harvey Elliot is a long-term absentee due to his ankle injury.

German midfield star is out until after the international assignment due to his thigh injury while Oleksandr  Zinchenko could make a return. Left-back defender Benjamin Mendy remains suspended by the club.

Liverpool and Manchester City is one of those games that would surely see plenty of goals scored as the case may be ahead of the clash.

The Anfield side could be a favourite since they are playing at home but City's impressive showing away against Chelsea last weekend keeps them firmly in the contest.

But somehow Liverpool should be able to find a win over Manchester City in front of their home supporters.

Liverpool is a better attacking side than the reigning champions of England. They score ‘2.5' goals per match on average. Whereas, City score two goals per match.

The home side has a better ‘Shots-per 90 minutes' average by 35%. Moreover, their shots on target ratio are also superior by almost 60%.

Liverpool might have surpassed City in terms of attack but no doubt City is far better defensively. This is what allows them to win matches and leagues.

Zero per cent of City's matches end up in both sides scoring, they either score or the match ends as a nil-nil draw. Moreover, they have a clean sheet in 83% of their matches, which is 17% better than the home side.

Therefore, Mohammed Salah, Roberto Firmino, and Sadio Mane would have a tough time getting past the wall of Ruben Dias and Aymeric Laporte.