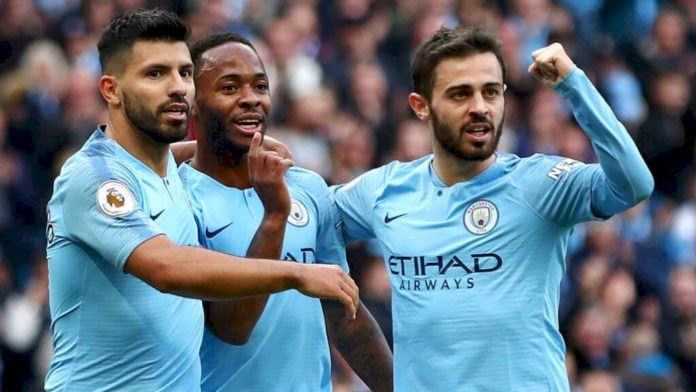 The return to fitness of several first-team stars have boosted Manchester City ahead of their clash with Fulham this weekend when they travel to Craven Cottage.

John Stones, Fernandinho and Kevin De Bruyne all trained with their team-mates on Monday while Aymeric Laporte will also hope to feature against the Cottagers.

Ederson is sure to start in goal against the Cottagers while Kyle Walker will line up at right-back and Danilo or Oleksandr Zinchenko will deputise on the opposite flank.

Vincent Kompany is an alternative at centre-back if either Stones or Laporte are not fit to feature, while Fernandinho has been deployed there when required.

The Brazilian should line up in midfield together with De Bruyne and David Silva while Ilkay Gundogan offers Guardiola a versatile option.

This will mean Bernardo Silva is expected to push forward onto the right wing and allow Raheem Sterling to operate from his favoured left side.

There is no place for Riyad Mahrez or Leroy Sane in the starting XI while Sergio Aguero gets the nod in attack over Gabriel Jesus, regardless of the latter scoring twice for Brazil against Czech Republic.

While rotation is a matter-of-course, Pep Guardiola's side will also have one eye on their forthcoming home clash with Cardiff on Wednesday which will possibly see fringe players handed rare starts.

City later face Brighton in FA Cup action before taking on Tottenham in the first leg of their Champions League quarter-final.